Police officers have one of the most dangerous jobs in the world, knowing full well that this shift may be their last. Lately, however, the amount of fear they feel as they pin that badge to their chests has skyrocketed, leading more officers than ever to feel frightened of going to work.

A shocking new poll reveals exactly how safe our officers feel on the job and the numbers are heartbreaking. 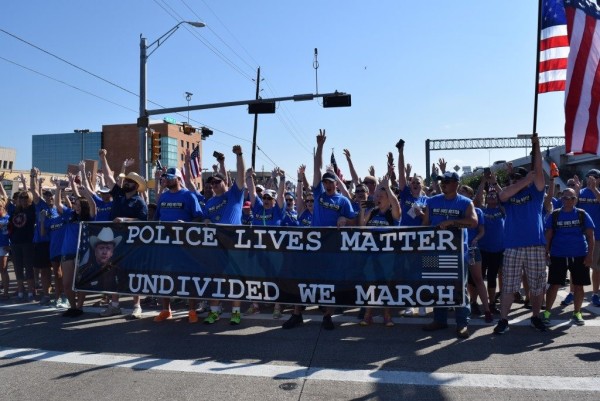 The 8,000 man army of blue begins its march on the Sam Houston Parkway in Houston. (Photo: Breitbart Texas/Bob Price)

Your local police are the only thing standing between good people and a city run by criminals. Unfortunately, they often don’t get the recognition they deserve for their selfless occupation and even face criticism for any little thing they do.

Because of this, and the rise in tensions between the black community and local law enforcement, a new poll[2] reveals that only 7% of our officers feel safe in the line of duty.

That means an overwhelming 93% of officers do not feel safe while on the clock.

The Daily Caller[3] offers more insight on the matter:

Most police officers believe their job has become more dangerous in light of recent fatal encounters between cops and black people, a poll reveals.

A Pew Research poll released Wednesday[4] surveyed 8,000 male and female officers across the country to get their opinions on policing, the recent protests against officers and their thoughts on using force against civilians.

Eighty-six percent of officers surveyed said the recent high-profile encounters between police and black people have made their jobs more difficult. Only 12 percent believed the encounters did not make a difference.

In light of these encounters, 93 percent of officers are also more fearful for their safety while on the job.

These are heartbreaking numbers and I hope that Donald Trump can get into the White House and inject some hope back into our men and women in blue.