Anytime I get pulled over (it’s only happened twice), I’ve always spoken respectfully to the officer, had my paperwork ready for him to run and wanted to get out of there as quickly as possible. Worst case scenario, it takes about 10 minutes to get everything done. It’s painfully boring to sit there and wait for the results to come back, but it’s always gone off without a hitch.

Never once have I tried to use my position to get out of a ticket. (I don’t have one but I like to pretend.) Never once have I had a mental breakdown, screamed, or freaked out. Despite having an anxiety disorder, I’ve never had an attack of any type and anyone who knows me knows how easy it is for me to stress over any little thing.

That being said, I’m clearly in better shape than this Democratic lawmaker, who was caught speeding and proceeds to create one of the most entertaining dash cam videos I’ve seen in quite some time. Seriously, she deserves some sort of award for this performance. Perhaps the highly sought-after Silver Bracelets? 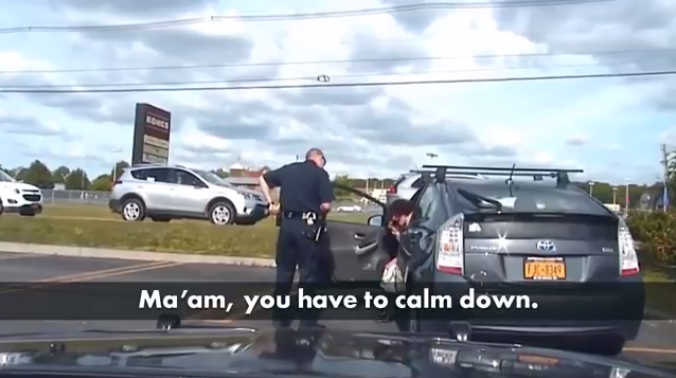 Jennifer Schwartz Berk, a New York lawmaker, got busted for going 43 MPH in a 30 MPH zone and I’m guessing in New York that’s an expensive ticket. One that she tried to get out of by having an epic panic attack, complete with screaming, claiming that she has PTSD and hyperventilating. A lot.

She claimed that she had just been going the same speed as everyone else and that if she had tried going any slower people would have honked at her. And we all know that’s right up there with waterboarding and watching a cuddly kitten get kicked into a pit of snakes… being honked at for obeying the law is one of the worst things you can have happen to you. She also tried to pull the “singled out” card, but the cop wasn’t having it. He was patient with her, but after 30 minutes had passed with him trying to calm down a woman who is clearly a few fries short of a Happy Meal, he was ready to be on his way.

She screams that she is going to protest this in court, but good luck with that lady. You’re going to have a hard time convincing any judge that you were correct in exceeding the speed limit by 13 miles an hour. She ended up driving away with a ticket and a summons for her speeding charge.

Guess you’re not as important as you thought you were, huh?