Congratulations to Mohamed Noor, the first Somali police officer in his Minneapolis precinct. Due to P.C. preferences, a stellar career is sure to unfold before him — unless he derailed it when he blew away a woman for no apparent reason Saturday night:

The police officer who shot and killed an unarmed Australian woman in mysterious circumstances after she called 911 to report a disturbance behind her upscale Minneapolis home has been identified.

Mohamed Noor, who joined the department in March 2015, reached over and shot Justine Damond, 40, multiple times from the passenger seat of his squad car while she spoke to his colleague on the drivers side in a back alley.

Both officer’s bodycams were off and the squad car camera not recording when Damond – who was in her pyjamas – was killed at around 11.30pm on Saturday, just a month before she was due to marry.

At last word, the police had put forth no explanation for this homicide.

In his short career, Noor already had three complaints against him, two of which are still under investigation.

Damond had called 911 to report what she believed to be an active sexual assault. Ironically, she was a militant opponent of anyone but the authorities being allowed to own firearms.

Somehow, I doubt this story will generate as much outrage as when white police officers are forced to shoot black criminals. 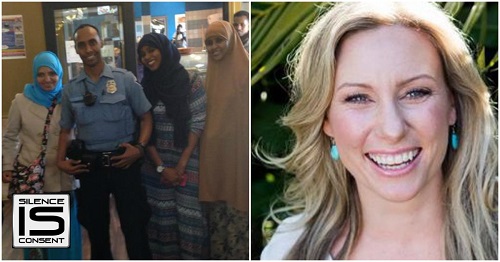 No one knows why he killed her. Via Silence Is Consent.

On tips from Stormfax and Dragon’s Lair. Cross-posted at Moonbattery[1].