This just ticks me off.[1] A teenager named Julien Rodriguez, 16, decided to make his cop-hatred heard during the funeral of Officer Miosotis Familia. She was assassinated in her car on duty in New York. A radical leftist cop-hater walked up and shot her in the head. She died instantly… she never had a chance. They did hunt down her killer and he got taken out. She was with the NYPD for 12 years and leaves behind three children. And this dirt bag has the nerve to play “F— Tha Police” at full volume right across from where thousands of police are gathering for the funeral.

This happened in the Bronx. Rodriguez felt justified because he claims his older brother and best friend were unjustly killed by the police. I highly doubt that. It is no excuse for this vile behavior. He got a visit immediately from 20 very angry police officers who came to his door and demanded an apology. Good for them. The teen claims he refused to apologize and then the police threatened to evict him and his family from public housing. So he apologized. Anyone else think that’s a crock too? Sounds like it to me. 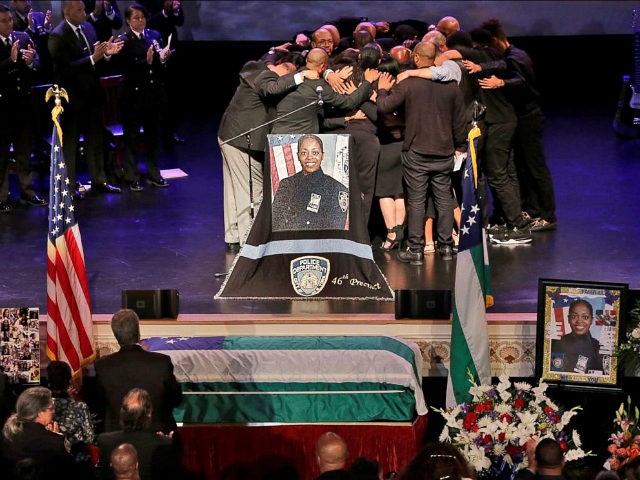 A teenager from the Bronx blasted out the NWA song “F— Tha Police” from his apartment block as thousands of police officers mourned the death of Officer Miosotis Familia, who was assassinated[3] as she sat in her police vehicle last week, The New York Post revealed.

Julien Rodriguez, 16, said he found the experience “satisfying” as his older brother and best friend had been unjustly killed by police.

“Since they did not show respect for my brother and my friend, why should I show respect to them?” he told The New York Post.

Around 20 furious law enforcement officials then went to the teenager’s door to demand an apology, which he refused to give. Police then allegedly threatened to evict him and his family from their social housing, which finally forced him to relent.

“I apologized because it was between the house and apologizing,” he said.

Rodriguez claims he did feel sorrow over the death of Familia. Bull crap. You don’t act like that and feel any kind of sorrow or remorse while doing it. You are vengeful, hateful, spiteful and just plain down mean, but you do not feel ‘sorrow’. “I feel sympathy for that, because all she was trying to do was take bad people off the street,” he said. “It was wrong because she did not do anything wrong but at the same time, my bro and my best friend died for no reason.” He might want to truthfully review why his brother and best bud died. Chances are they were committing a crime and threatening the police. I know that’s assumptive on my part. Too freaking bad.

And guess what? The teen provided the so-called names of his brother and best friend who were killed by police to the New York Post, but they couldn’t find a damn thing on either one of their deaths. So much for that.

During the funeral procession, hundreds of NYPD police officers also expressed their anger at commie New York Mayor Bill de Blasio by turning their backs days after he decided to skip a swearing-in ceremony for 524 new NYPD cops, so he could catch a flight to Hamburg in order to protest Donald Trump. That makes me very happy in the middle of all this sadness. #BacktheBlue #BlueLivesMatter