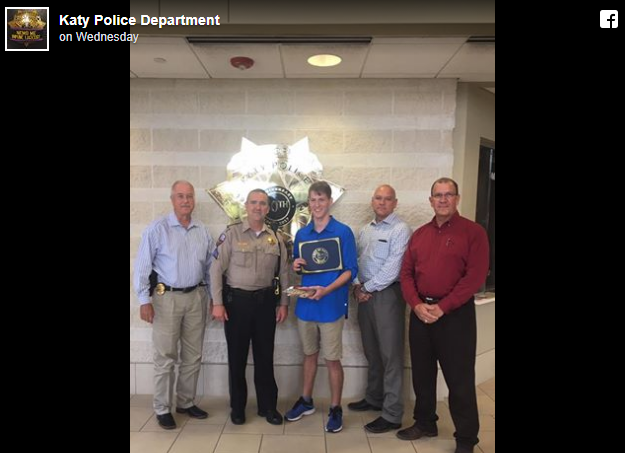 In Katy, Texas, a police department took time this week for recognizing a local teenager who was suspended from work after showing a small token of appreciation to a member of that force.

18 year-old Zachary Randolph was working at the Great American Cookie Co. and bought an officer in the lineup a brownie, and was subsequently fired. As you can imagine, the outrage is real.

In a Facebook post, the boy’s mother Tami Kurtz Rudolph posted a long explanation of what happened. You can read the whole thing here[2], but this is the important bit:

My Son works at Katy Mills Mall and on Sunday evening an on duty Police Officer walked up to the counter and placed his order. My son offered to pay for his cookie with his own money. The officer was grateful said thank you and walked away…..

The next family walked up and said “are you going to buy mine too?” My son replied with “I’m sorry I bought his because he is wearing a badge”…… then this customer started verbally attacking him, calling my son a racist, & threatened to beat him up. His wife threatened to go back there and slap him.. The middle aged man sat down his little daughter and tried to come behind the counter to attack him. Thankfully his coworker defused the situation. The man then said “I will get you fired”.

After that, he received a text from his manager to meet him, and Zach was suspended for a week. Zach’s mother said that upper management wanted him to be fired, but it was dropped down to a suspension. So far, there are over 28,000 reactions, 11,000 shares and 10,000 comments on the Facebook post alone.

Eventually, the Katy Mills franchise lifted the suspension and made assurances of better management training in similar situations. Randolph will also be paid for the work he missed during the suspension.O

On top of it all, the manager on duty who did not interfere when Zach’s verbally abusive customer came up next in line, has been “relieved of all duties and responsibilities” related to the cookie stand.