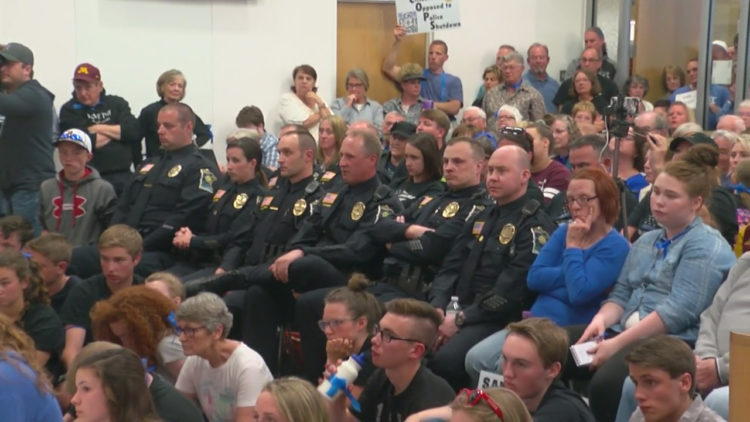 This week in Forest Lake, Minnesota, hundreds of students from the local high school walked out of their classes on Tuesday in a peaceful protest to draw attention to a Monday night vote by their city’s council to disband the local police department. And in a massive shift from the student protests we’ve seen at colleges across the country, these students did it the right way.

No violence, no burning cars, no face masks, no hitting people with bike locks… exactly the kind of peaceful protest that can cause change in a positive manner.

Students from both the middle and high school marched out at 1:15 p.m. and headed to City Hall, where they chanted “FLPD!” outside the city council chambers.

About an hour later, students made their way into the council chambers where they continued their protest.

Forest Lake Police Chief Richard Peterson said he was moved to see such a large crowd of young people in the community coming out to show their support.

“This is absolutely amazing,” he said. “The students are fantastic. The community is fantastic. We are absolutely humbled by the support we’ve been given, really appreciate it.”

You can watch the kids arriving at City Hall in this video:

Fox News contributor Pete Hegseth who grew up in Forest Lake praised the kids and posted the following video.:

THIS IS MIDDLE AMERICA. Kids (from my hometown of Forest Lake, MN) marching to SUPPORT their police (@ForestLakePD[8])! https://t.co/pWiFwBKTRW[9]

Since the protest, things have been looking up for the future of Forest Lake’s Police Department, who have assured citizens that they will continue to provide services until formally dismissed.

Looks like all the coverage the students provided is working in the favor of reinstating the police!

In John Hawkins’ new book, ‘101 Things All Young Adults Should Know’, he teaches in chapter 20 of the book that this is how you deal with the police. If you know a young adult in your life who could stand to benefit from understanding how a peaceful protest like this works instead of a violent one, pick up a copy today.