This Woman Trashed a Dead Cop, and Then Karma Paid Her a Visit Hours Later

It takes a special kind of person to see the tragic news of the death of a law enforcement officer, and to then trash the officer who died. But that’s exactly what New Jersey law clerk Leslie Anderson did. 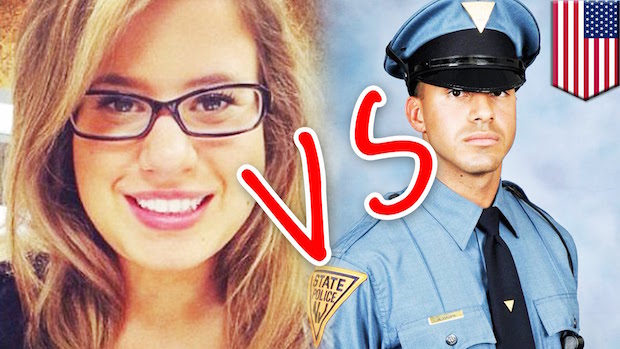 New Jersey law clerk Leslie Anderson is a real piece of work. She decided to bash a police officer on social media after he was tragically killed earlier this month in a car accident.

Trooper Anthony Raspa struck a deer with his police cruiser after it ran into his path, causing the vehicle to veer off the road. According to the Conservative Tribune, the 24-year-old’s cruiser careened into a wooded area and Raspa did not survive injuries sustained at the scene of the crash.

While his family was grieving and attempting to pick up the pieces after his untimely death, Anderson decided to tear him down in a manner which only someone who is completely self-absorbed could.

“Not that sad, and certainly not ‘tragic,’” she wrote via Facebook. “Troopers were probably traveling at a dangerously high speed as per usual. Totally preventable. At least they didn’t take any of the citizens they are sworn to serve and protect out with them.”

“Nonetheless, I agree that it is sad and heart wrenching for the family members left to suffer the consequences of the Trooper’s recklessness — especially for the deer family who lost a mommy or daddy or baby deer.”

It is shocking that anyone would be so heartless, but considering the fact that Anderson practices law as a profession, you’d expect a little more impartiality from her, or at the very least, that she could exercise some tact.

It looks like that career may be a thing of the past, though, because hours after her rude comment, public outcry led to Anderson’s suspension from work. It is expected that she will eventually be terminated as a result of her insensitive Facebook comment, which would be the right move by her employer.

Anderson ended up beating her employer to the punch and resigning before she could get fired. Maybe next time she’ll think twice before trashing the memory of someone who gave their live in service to their community.