This is just hysterical.[1] The Simpsons has always been one of my favorite shows even though they go somewhat leftist. They are witty and funny. I haven’t watched them in a long time with America being on fire and all. But this segment just makes me love them even more. The Simpsons take aim at social justice warriors in this skit and it’s fantastic! It revolves around the entitled pansies at Yale and how they are destroying a once great school. It’s so amusing I even called in hubby to watch it. Heh.

The Simpsons knocked it out of the park on this one. They used every lame term and phrase in the episode, including the gender issue and bathrooms. Turns out in the end that everyone is a robot. Gee, I’m so not surprised and if that were real life, it really wouldn’t shock me either. That’s how surreal campuses are anymore. 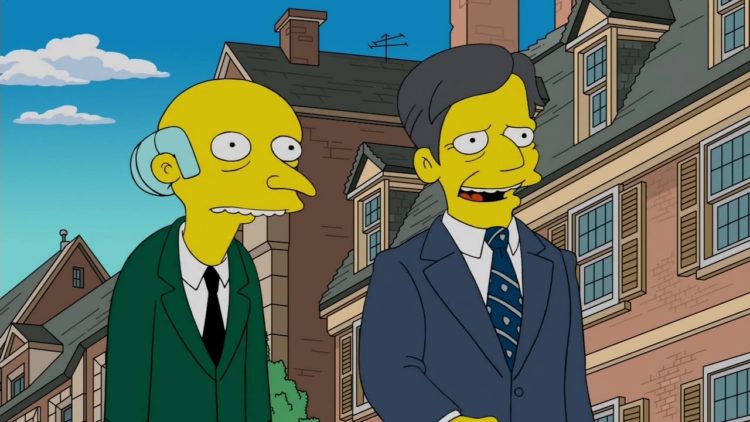 The Simpsons, famous for decades for mocking the political right, had a strange metamorphosis this week, mocking social justice warriors with a segment depicting a donor who visits Yale University and is confronted by the world of political correctness.

The segment started with the elderly donor accompanied by two interviewers, one male and one female, as they strolled through the university campus. The segment went like this:

Donor: It’s delightful when you take turns, sniffing after my money.

Donor: I am here to offer you money; I’d like to endow a department of nuclear plant management.

MI: Wonderful. Of course, we can’t do nuclear –

FI: Our students are highly-entitled wusses.

MI: You’d be creating a space for violence to happen. Hmm. How about funding a chair in the non-narrative cinema of self-identified pansexuals?

FI: We also need to hire more deans to decide which Halloween costumes are appropriate.

MI: Eight deans should do it.

Donor: Is this still a coven of capitalism, where evil money can acquire a patina of virtue?

MI: Yes. That’s in our charter.

FI: But with an issue as hetero-patriarchal as nuclear power, we’ll have to hire multi-cultural empathizers, build a new safe space –

The fact that a comic character parody can replicate the social justice environment on campuses so accurately says a lot about the students attending these schools, as well as the professors and deans there. I feel for the sane students that brave these dens of liberal insanity. They either have to pretend to be something they aren’t, or they wind up leaving. It’s not easy to be a college student these days and keep your morals, ethics, integrity and sanity intact.

Conservatives aren’t even allowed to speak on most campuses anymore. And God forbid you get caught with a Bible or a copy of the Constitution. They just might tar and feather you on the spot. Freedom of speech and ideas is no more… conform or be banished as an untouchable. John Hawkins has a new book out entitled, ‘101 Things All Young Adults Should Know’. In it he points out don’t stay in a bad situation because you are afraid of change. That applies to these schools. A college degree isn’t everything anymore. Make your own way and your own success… and do it in a way that offends social justice warriors as much as you can. Just sayin’.