If you see something on a college campus that crudely advances a politically incorrect point of view, it would be naive in the extreme to take it at face value. For example, consider posters like this one, which appeared at Gustavus Adolphus College in Saint Peter, Minnesota: 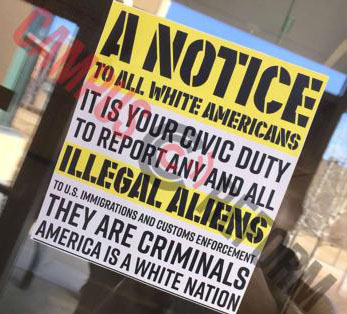 Students promptly reported the posters to the Thought Police, which at Gustavus are officially called the “Bias Response Team.” At least one of them…

…received a response from Dean of Students Jones VanHecke explaining that the offensive flyers were actually “part of a series of educational ‘invisible theater’ events taking place this week that have been planned by I Am We Are theater troupe, the Diversity Leadership Team, and the Bystander Intervention Committee.”

The Diversity Leadership Team fessed up to the hoax:

In response to the outrage over the flyers, the Diversity Leadership Council published a statement the night the posters surfaced admitting that members of the organization had “posted these signs” in “an effort to help educate [their] peers and campus community about issues of bias, and the importance of being an active bystander.

“We want to help put an end to bias-related incidents that happened on our campus, social media, and in our communities by forcing individuals to have dialogues about forms of hate and bias,” the statement continues.

That is, they want to put an end to bias-related incidents by fabricating them, since they do not have the patience to wait for one to actually happen so they can righteously denounce it. Note that so much as holding a politically incorrect view now constitutes a bias-related incident of such seriousness that it has to be staged.

The Gustavus Adolphus College Diversity Leadership Team may not be good for much else, but at least it made the Hate Hoax List.

On tips from Dave F, Sterling B, rpp618, and J. Cross-posted at Moonbattery.