Duck Dynasty’s Phil Robertson: “They railed against me for giving them the truth about their sins.”

A&E learned the hard way that it was a bad idea to try to punish Duck Dynasty star Phil Robertson for speaking openly about his beliefs — there was massive pushback from Robertson’s fans and supporters, merchandise sales skyrocketed, and A&E quickly realized that suspending him was one of the stupidest ideas they’d ever had. Gay rights activists tried to smear Robertson as homophobic for stating basic biblical beliefs, and now, they’re trying to do it again. 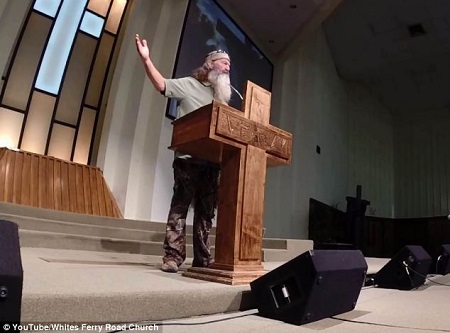 Robertson was filmed giving an Easter Sunday sermon at Whites Ferry Road Church in his hometown of West Monroe, Louisiana on April 20, according to the video on YouTube.

In the footage, the 68-year-old expresses his anger at the outcry over his December interview in GQ magazine, in which he likened homosexuality to bestiality and branded gay people sinners.

‘They were mad at me,’ he tells the congregation in the video. ‘You say, “why’d they get mad at you?” Cuz instead of acknowledging their sin, like you had better do, they railed against me for giving them the truth about their sins. Don’t deceive yourselves.’

He went on: ‘The news media didn’t even know it was a verse! They thought I was just mouthing off. “Is homosexual behavior a sin?” The guy asked me. I said, “Do you not know that the wicked will not inherit the kingdom of God? Don’t be deceived”.’

Paraphrasing a Corinthians verse, he continued: ‘Neither the sexually immoral, nor the idolators nor adulterers nor male prostitutes, nor homosexual offenders, nor thieves, nor greedy nor drunkards nor slanderers nor swindlers will inherit the kingdom of God.’

It’s interesting that the only thing that gay rights extremists focus in on is the one part about homosexuality — just ignore that he also gives a laundry list of other, non-homosexual, sins, and also ignore the actual meaning of what he’s saying. If what Phil Robertson is saying is hate speech, then — considering it’s basically quoting the Bible — that means that Christianity is hate speech, and that’s something that should make all Americans nervous, whether they’re Duck Dynasty fans or not.