I knew this was coming, but it still shocks me. George Washington worshiped at Christ Church in Alexandria, Virginia. There is a plaque there honoring our first President and their most famous congregant. Or at least there was… they removed it so their parishioners would feel more ‘comfortable and safe’. When I first sent this out this morning on Facebook, people were livid over it and wanted to know why they did such a disrespectful thing against a Founding Father. In a word… political correctness and because they can.

The vestry for the Episcopal congregation explained in a letter that they had spent all of September listening and communicating with their members through emails and calls before they came to their decision. So, their flock must be comprised of leftists and/or Black Lives Matter adherents. Washington would roll over in his grave if he knew this crap was going on. They are a disgrace and not worthy to bear recognition for a man as great as George Washington. 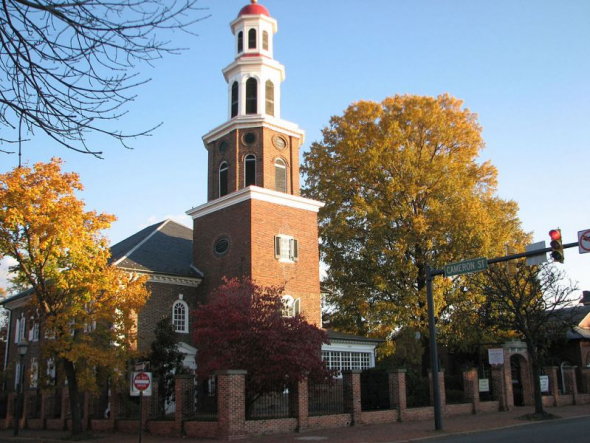 “Many in our congregation feel a strong need for the church to stand clearly on the side of ‘All are welcome — no exceptions,’” the letter explained. So, because Washington owned slaves which he owned through inheritance and marriage, they consider him a racist. Washington was no such thing. Laws prevented him from freeing his slave. George Washington left instructions in his will to emancipate the people enslaved by him, upon the death of Martha Washington. He included provisions in the will for those who wanted to learn a trade and those who were infirm or too old to work. Legally, it was the only recourse left to him. But of course these idiots don’t care about that. They’ve never even studied history, so how would they know.

“Because the sanctuary is a worship space, not a museum, there is no appropriate way to inform visitors about the history of the plaques or to provide additional context except for the in-person tours provided by our docents.” The church recognized Washington and Gen. Robert E. Lee (who also has a plaque there that is now removed) lived in different times and were, “like all of us, a child of God,” nonetheless, “Today, the legacy of slavery and of the Confederacy is understood differently than it was in 1870.” Obviously, they don’t understand history either.

“For some, Lee symbolizes the attempt to overthrow the Union and to preserve slavery. Today our country is trying once again to come to grips with the history of slavery and the subsequent disenfranchisement of people of color,” the vestry said. The church is promising to ‘relocate’ the plaques and not put them in storage. How thoughtful and revisionist. “Rather, they will remain in the church until they can be relocated to a place of respectful prominence where they will be fully visible to parishioners and tourists alike.”

This is simply shameful. I would never step in a church again that so disrespected a Founding Father. When you put race or political correctness above respect for your heritage, country and those that gave you freedom in the first place, you are nothing more than a retched fool. Shame, shame on this church and those who made this decision. If it is collectivist salvation in the midst of liberation theology you seek gentleman, you are well on your way to communist blasphemy.

I’ll leave you with a quote from another Founding Father, Samuel Adams:

“If ye love wealth better than liberty, the tranquility of servitude better than the animating contest of freedom, go home from us in peace. We ask not your counsels or arms. Crouch down and lick the hands which feed you. May your chains set lightly upon you, and may posterity forget that ye were our countrymen.”