Introducing the Menace of Microinequities

You might have thought that campus moonbats would rest for a while after pushing their whiny ideology to what seemed to be the last extreme of self-parody with the concept of microaggressions. But progressives always find a way to progress. Now they are railing against “microinequities”:

Carnegie Mellon University … has produced a guide for creating an inclusive learning environment warning professors that using gendered language, forgetting student names, or other “small unconscious behaviors” in class can make women and minority students feel that they are not valued.

To combat the threat of being non-inclusive, professors are told to steer clear of “microinequities,” which are defined as “small unconscious behaviors…that certain groups experience repeatedly.”

For example, a microinequity might consist of asking someone “more recall questions and less analytical questions.”

The foundation of modern liberal ideology is the belief that favored identity groups are somehow oppressed. That moonbats have to go to such laughable extremes to find any evidence of oppression gives the lie to the entire enterprise. 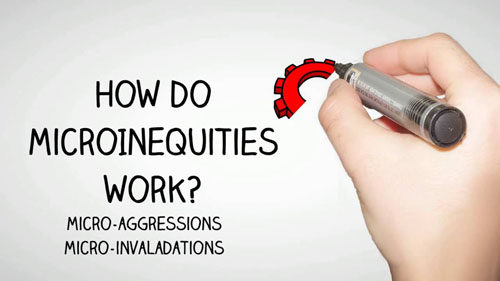 Let’s not forget about microinvaladations (sic).

On tips from rpp618 and J. Cross-posted at Moonbattery.