Muslim Says She’s ‘Offended’ By Bacon Sign, Then THIS Happens

Well, that’s one less restaurant I will ever visit[1]. They should be ashamed of themselves. Sneakers Bistro restaurant in Vermont put out a sign to advertise their yummy bacon. All it said was, ‘Yield for Sneakers Bistro Bacon.’ A Muslim woman complained that she found the sign offensive. So, what does the restaurant do? Why, they cave in the name of diversity of course. They removed the sign and apologized on Facebook citing opposition from Muslims and safety concerns. What? Were they afraid of marauding Muslims storming the restaurant over bacon? This is just political correctness gone insane. They’ve taken down their Facebook page now and I predict a massive hit to business for these liberal weenies. 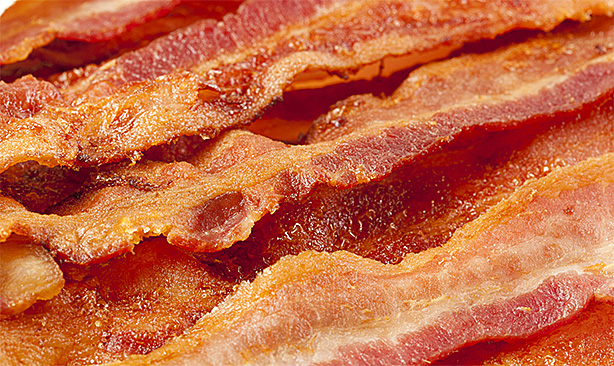 Last year we reported[3] on a Muslim man who complained about a school which passed out fliers inviting students to an Easter Egg hunt — actually claiming it violated the Constitution.

Now a sign even mentioning bacon is now insensitive to the Muslim community. But it’s what one business did in response that will really make you upset. 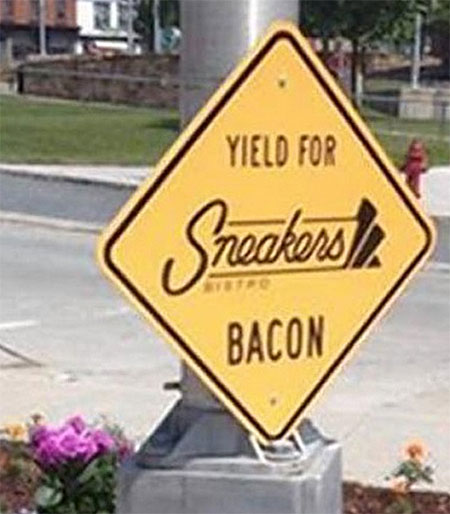 The sign was put up as part of a city program that allows businesses to post an advertisement in an area where they have helped maintain city flowerbeds. The sign that read “Yield Sneakers Bacon” was removed after a woman, identifying herself as a Muslim, posted in an online community forum, stating she was personally offended by the sign, according to a WPTZ News report. WPTZ wrote that the woman who complained online called the sign “insensitive to those who do not consume pork.” 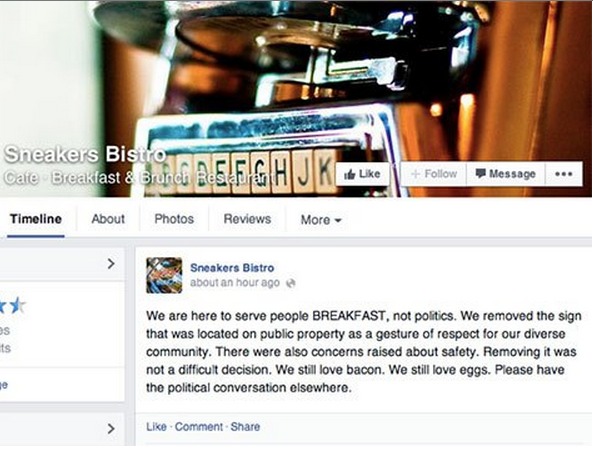 As The Federalist Papers[9] says, spot-on:

The part I don’t understand is the restaurant owner claims one of the reasons the bacon sign was removed was over “safety concerns.” Did they think the Muslims in the community would riot and burn the business down? If that’s the reason they should not have done it.

Giving in to terror simply emboldens the terrorists!

The woman who was offended needs to get a grip, or perhaps move to an Islamic country that practices the sharia law she clearly wants.

Religious Jews also don’t eat bacon or pork. Yet, I just did a Lexis search of articles in the past 25 years of a Jew asking for any mention of bacon or pork to be removed from any sign. There is not even ONE. Yet this woman — in Vermont of all places — feels completely emboldened to demand this sign be taken down? She clearly does not understand our 1st Amendment traditions. Sadly, the store owner understands it even less.

Jews don’t complain over such things… only Muslims who want Shariah law instated do. Businesses and communities should not grovel before any religion, especially Islam. One complaint and these morons go wet themselves in a corner. Just disgusting. There are many forms of terrorism and this woman is practicing a soft form of it by intimidating businesses to conform to her Islamic guidelines. I don’t see them making concessions like this for any other religion or race, so why give in to one woman who is obviously fascist? If it were me, I’d double down. I’d put signs all over the place, rent a billboard and do daily specials on pork. I’d even give a 10% discount to those who are offended.