A Black Lives Matter-type punk who leads a group that excuses gangbangers and criticizes police was caught on video verbally berating Baltimore minister Jamal Bryant telling him “the streets don’t want you here” and trying to intimidate him into leaving a troubled city neighborhood in which the pastor was trying to reach residents with a Christian message. 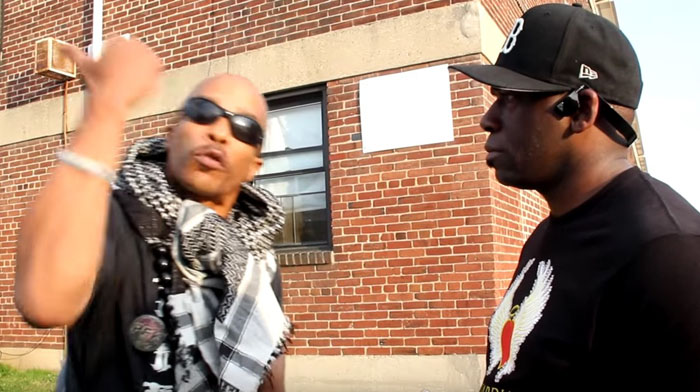 Bryant, the pastor of Maryland megachuch Empowerment Temple AME Church and a social activist and commentator, was in Baltimore to help residents change their crime infested neighborhood, but gang apologist “Boom,” whose real name is Davon Neverdon, was caught on video trying to harass the pastor.

As The Blaze reports[1], Neverdon criticized the pastor for coming too late to help the neighborhood.

Boom, whose real name is Davon Neverdon, co-founded the group, “300 Gangstas” as an outreach for some of Baltimore’s the most dangerous citizens. Neverdon, who was arrested and ultimately acquitted of murder in 1993 after spending more than three years in solitary confinement, speaks out against such forms of punishment, the Guardian reported.

The heated exchange between Neverdon and the 12,000-member Empowerment Temple megachurch pastor, which was recorded and posted to YouTube by another grassroots group called Baltimore BLOC, began shortly after Bryant showed up to West Wednesday, a weekly gathering organized by the family of Tyrone West. After West was killed following an altercation with police officers during a traffic stop in 2013, the Baltimore man’s family filed a multi-million dollar lawsuit against the officers involved, WJZ-TV reported.

Neverdon had a lot to yell, showing his street punk pedigree…

In the clip, an angry Neverdon confronts Bryant about the ways in which he believes the megapastor disrespected “the streets,” the people who feel that they have been marginalized by Baltimore’s government and law enforcement.

“You said you for the people. You got our people all up in your church. You suppose to lead these people man … . You disrespect our streets. You’re f**king with our apostles,” Neverdon said.

“The streets don’t want you here!” he insisted as Bryant nodded and remained silent.

Neverdon proceeded to mock Bryant’s t-shirt, which had the words “Guardian Angel” printed on it.

Here is the full video of the exchange, but beware, the language is very strong and is not safe for work.