Republicans have been saying “Remember November” all year long and we’re finally about to get there. So, how’s it looking right before the big day? Most of the prognosticators seem to be predicting gains of around 50 seats for the GOP. Although I’ll be doing some more research this week-end and coming out with a final forecast on Monday, my initial thought is that those numbers seem a bit cautious to me. Why? Well, for one thing, the political hurricane whipping across the country is STRONGER than it was in 1994 when we took 56 seats. 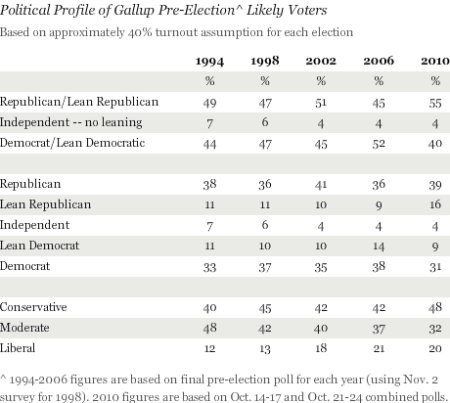 Just look at those numbers. In 1994, the GOP had a 5 point spread and now? It’s 15 points. This is why candidates like Scott Brown have been able to get elected. It’s why you see Republicans running competitive races in heavily Democratic districts. It’s why people like Steny Hoyer, Barney Frank, and Dennis Kucinich have actually had to get off their behinds and go out and campaign.

Don’t get cocky, but, folks, the wind at our backs probably isn’t ever going to get much stronger than this.