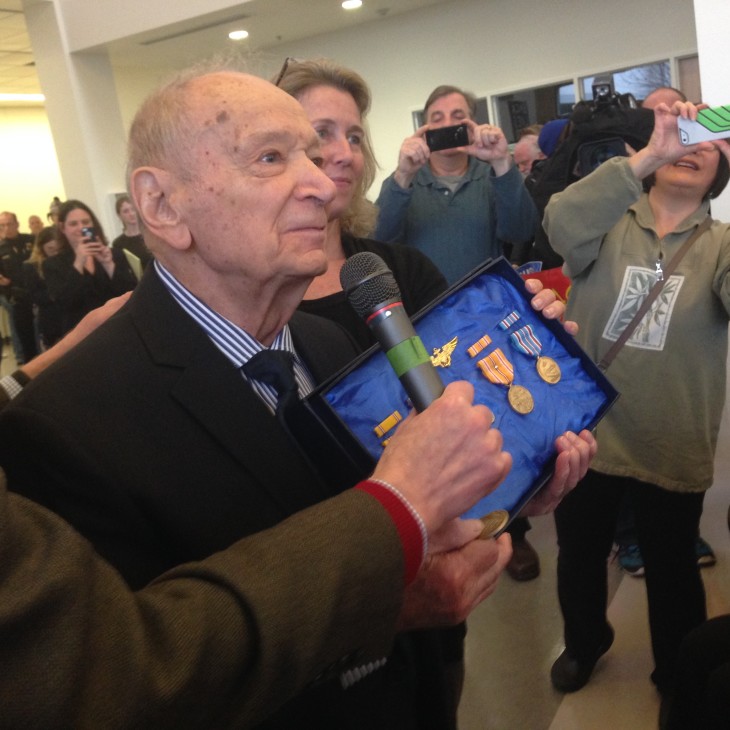 U.S. Navy veteran Dario Raschio was all smiles Saturday as he awaited a special honor from U.S. Sen. Ron Wyden, who joined him at Portland Community College’s Southeast Campus to present the 100-year-old with a handful of medals.

Shortly after Wyden began speaking, though, protesters erupted in the back of the room, shouting “hands-up, don’t shoot!” More than 100 pushed through the doors, banged on the windows from outside and hoisted signs.

Raschio and his daughter, Pam Brown of Portland, had a front-row seat to the spectacle. Raschio’s smile faded.

… On Saturday, Raschio glossed over the incident. He seemed more concerned by the immediate action he was witnessing. As he grabbed the mic to speak, more shouts came from the back of the room, demanding the military exit from Iraq.

The feisty centenarian quickly responded, “Give me a chance” which brought chuckles from the audience. He further chastised the shouters, saying “Let’s show a little respect for this occasion,” to which the crowd applauded.

He accepted the medals on behalf of those who died in WWII and ended his short speech by saying, “God bless America. And you people that are here for a cause, whatever it might be—show respect to Sen. Wyden.”

Wyden took back the mic, and followed up, “One of the reasons that we can come here today and be heard and express our views is because of veterans like Dario.”

But before Raschio could even sit down the unrest resumed. A protester at the front of the room announced that “for 4.5 minutes we are going to take time to pay respect to everybody who has been killed by police in this nation.”

With that, the chanting began again. At 3:15, after waiting 45 minutes for the meeting to begin, organizers called it off.

These people are literally among the lowest of the low. But perhaps the worst part of this entire debacle is that the idiot senator — a Democrat, of course — actually chalked up the protests interrupting the ceremony as “poignant”… because, obviously, acting like animals and showing massive disrespect to a man who almost died in service to our country is totally heartwarming.