There is very little more offensive and despicable than vandalizing a memorial for fallen police officers. But that’s what a group of Black Live Matter thugs did, during a memorial dedicated to the fallen officers in Denver — and most offensive of all, the police chief instructed the cops to stand down and let them do it. 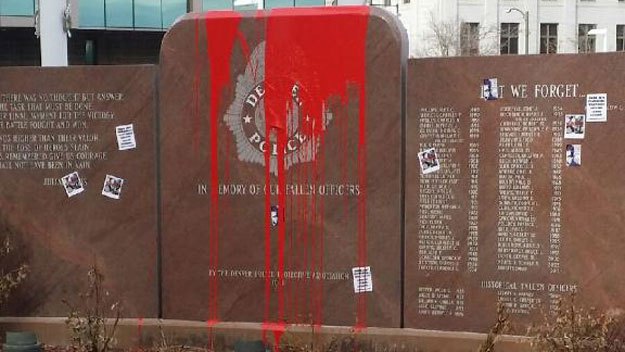 Two people were arrested Saturday afternoon while police monitored a group that had been staging protests throughout Denver.

During the protest a memorial dedicated to fallen police officers was vandalized, which has led to a controversy involving police administrators and the head of the police union, who is calling for Denver Police Chief Robert White to resign.

Approximately 100 to 200 people marched down Colfax Avenue from Lincoln Park to the Denver Police Department headquarters located at 1331 Cherokee Street. Some marched in support of Jessie Hernandez, a 17-year-old who was killed when she was shot by police during a criminal incident in January. While others demanded justice for people killed or “kidnapped” by police and protested “police terrorism.”

… Police arrested two men for criminal mischief in relation to the vandalism. Denver firefighters were later seen cleaning the paint off of the memorial, but Denver Police Union President Nick Rogers said the damage had been done.

Rogers spoke exclusively to CBS4’s DiSpirito following the incident. He said officers monitoring the protest were told by their superiors to not to interfere and to let the vandalism happen. Rogers said he and officers are so upset about that decision that he’s calling for White’s resignation.

Isn’t vandalization a crime? There’s really no excuse for cops to be told to stand down while a group of morons vandalize a memorial for fallen officers — and for once, the union president is right. The police chief should resign.