The debate over the National Anthem in NFL games continues to rage, although far fewer players are participating in the protests this season. Colin Kaepernick, the quarterback who kicked the protests off last season, is now without a job — but the protest won’t die. And on ESPN, one host even argued that white players should be doing more to show solidarity[1] with the players protesting the anthem. 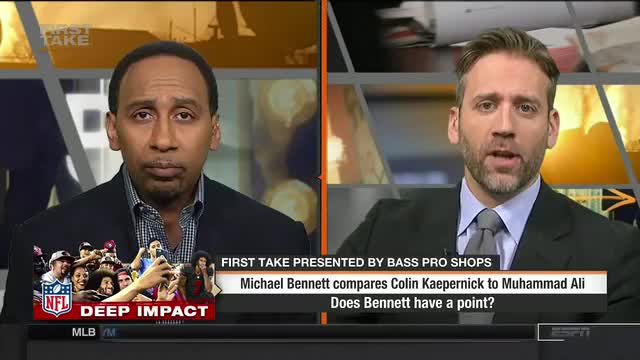 On ESPN’s “First Take”, Max Kellerman expressed his agreement with Seattle Seahawks player Michael Bennett for protesting the National Anthem — and with Bennett’s call for white players to join in, as a way to show “solidarity” with black players.

“I think Michael Bennett is 100 percent correct,” he said. “White players, where you at, baby?”

“Come on, what’s going on here? That’s the question right now,” he continued. “And by the way, yes, it depends on the white player. When you paint with a broad brush, black players, white players, they’re individuals, and they have their own ideas about things. So, I’m not saying all white players. What I am saying is, to Michael Bennett’s point, it would — not only would it be very helpful because it would show solidarity across racial barriers, or racial divides, particularly at this time in our nation’s history, particularly with recent events.”

He then slammed the white players, calling it “embarrassing” and a “disgrace” that none of them have come out in favor of the protests. “So you mean to tell me none of the white players in the NFL are maybe ambivalent at least about the protests, but then are thinking to themselves, ‘If I’m ambivalent, if I’m not really sure which way I stand, I need to show some solidarity right now?’ None of them? Not one? It’s a disgrace. It’s embarrassing. And it would be so strong if at least one, especially if he’s a star, stood up and did it,” he said.

Do you think joining the protests is the right thing to do?