One Man Decided to Mock the Absurdity of the #Ferguson Protesters – You Have to See This!

Many of the Ferguson protests have not only been illegal — rioting, looting — but also have bordered on the ridiculously stupid. One conservative talk radio host decided to spoof the protesters, while also taking a stand for police at the same time. 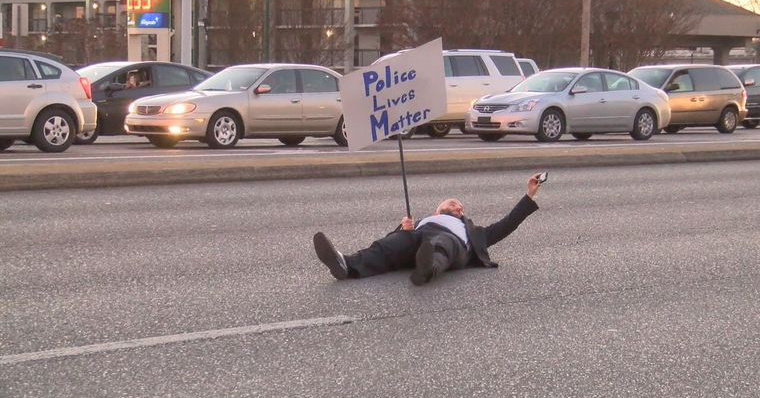 Huntsville conservative talk radio personality Dale Jackson was becoming increasingly frustrated with the protests over Eric Garner and Michael Brown cases where 300 Huntsville protesters were lying down and stopping traffic.

Mr. Jackson was so fed up that he decided to take matters in his own hands and stand up for the police.

“When I watched the Oakwood University protest, I thought to myself, ‘This is ridiculous. I can’t believe they shut down traffic for this.”

So he decided to put together a one-man protest, which would be even more absurd. Jackson told Yellowhammer. “I figured they’d (the police) tell me, ‘Absolutely not. What’s wrong with you?’ But they didn’t and I ended up walking down the street with seven cop cars.”

… “I was definitely wanting to support the police, that was part of the point,” he continued. “But the biggest point is that there is a right way to protest and a wrong way to protest. Lying down in the middle of the road is the wrong way and shame on the politicians who are afraid to stand up and tell them ‘no.’”

For all the talk of how “black lives matter”, there is very little acknowledgement of the fact that police officers risk their lives each and every day — and when they are gunned down by violent thugs, no one cares at all. Yet a loser who steals, assaults a shopkeeper, and attacks a cop should get our sympathy instead? In what world does that make any sense?