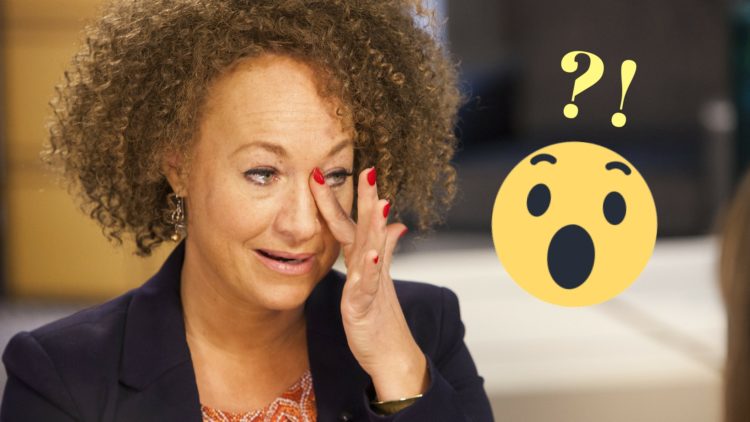 We already knew transracial activist Rachel Dolezal is a liar, but incredible new stories in her memoir that claim she witnessed familial sexual misconduct and suffered severe physical abuse are so absurd that I can’t believe anyone would publish this at the risk of legal action.

Dolezal has been in and out of the public eye since she was publicly outed as a white woman who was fired from the NAACP when they found out she was pretending to be black. As we reported in February, she was recently crying to the public for sympathy because she was almost homeless and on food stamps[2] because the only jobs left open to her were pornography.

Before we get into the absurd nonsense in the book, you should know that yes, her parents have been telling the media for years that she is, in fact, white[3].

Now one year after announcing her memoir[4], the day has finally come and I can’t recommend a better piece of comedy.

Her childhood is one riddled with:

…no doubt to convince us that she is, like, totally exactly like the black Americans who suffered slavery, because she even goes so far as to claim she was an “indentured servant.” Hold your anger and laughter, because it gets worse.

She explains that she was “forced” into a mother’s role when her parents opened their hearts and homes to adopt four black children, but she began to identify as black starting at the age of 5 when she would draw pictures of herself using a brown crayon. Her parents have denied this.

Her parents will probably also deny the accusations of beatings, cruelty and sexual misconduct. Dolezal says that her father would pat her on the butt, that he and her brother would walk around nude with their genitals exposed and that her brother Joshua had once:

[blockquote style=”1″]Pinned her to the floor, pulled up her shirt and bra and sucked on her nipples.[/blockquote]

Dolezal goes on to claim that she had once been forced-fed oatmeal and was forced to eat her vomit when she threw it back up. She claims her adopted siblings were beaten with glue sticks while she and her brother endured a wooden paddle.

Wow… if half of this is true, she could be praised as a strong woman who is now acting out and needs psychological help. But if any of this is false, she’ll be entertaining us in courts as her family fights these accusations for years to come.

One final word from Dolezal:

[blockquote style=”1″]After Dolezal divorced Moore, she writes, “now for the first time in my life, I was truly owning who I was: a woman who was free, self-reliant, and yes, Black.”[/blockquote]