Black Privilege Includes Getting Extensions on Finals at American University

Last week someone hung bananas around the campus of outlandishly expensive American University, along with the words “HARAMBE BAIT.” It is possible that the perpetrator was a woke person of color, considering that hate hoaxes have been occurring one atop another lately. Such incidents allow black militants to issue outrageous demands for still more special privileges, which liberal educrats obsequiously scurry to meet:

“For the remaining [sic] of the semester, the Bridge will become a sanctuary for people of color,” the ultimatum begins, referring to a student cafe and lounge on campus.

Students also demanded that “All POC [persons of color] students get extensions, and should not be penalized for already scheduled finals after the incident,” arguing that the racist incident on campus has distressed many students to the point that they are unable to focus on exams.

AU Provost Scott Bass quickly agreed to all of the demands. The crybullies were satisfied for the time being, although they could have insisted on still more. Bass…

Hang some more bananas, get some more privileges.

It’s a good thing for whites that white privilege doesn’t entail actual real privileges like getting an extension on your exams. If things are made too easy for you, you aren’t likely to accomplish much. 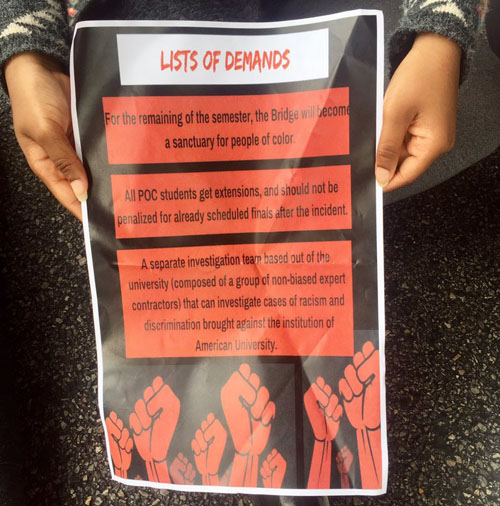 The Lists of Demands for the remaining of the semester.