Like Colin Kaepernick, Spike Lee is a talent-deficient black racist desperately attempting to use moonbattery to revive a career at death’s door: 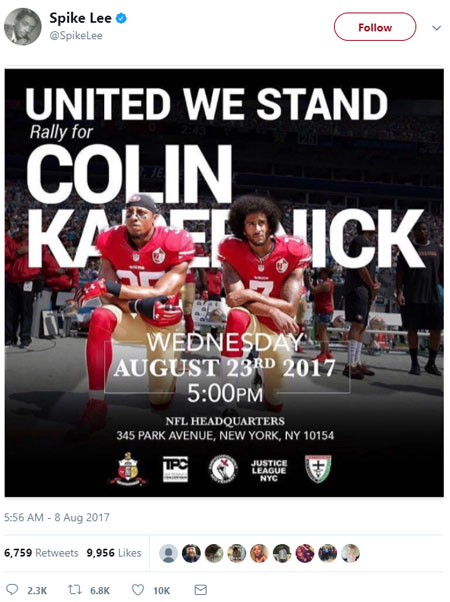 Note that these morons could not even spell their disgraceful hero’s name correctly.

One of the sponsors is the Justice League, famous for capitalizing on Eric Garner’s death with “I Can’t Breathe” shirts, as worn by LeBron James. To find racial oppression these days, you have to be willing to look under some rocks.

In addition to being a lousy quarterback, Kaepernick would be a terrible acquisition due to his highly conspicuous a-holism. A guy who theatrically refuses to stand for the national anthem, who praises a communist dictator, and whose girlfriend publicly depicts an NFL owner as a slave owner pleases ESPN moonbats like Max Kellerman and Skip Bayless immensely but will chase away fans. But we are expected to believe that no team has signed him due to racism, despite most NFL players being black.

Meanwhile, Kaepernick is said to have turned down at least one offer, presumably so he could stoke the phony racial controversy in hopes of starting a bidding war among teams eager to prove how politically correct they can be. The Kaepernick spectacle is phony and pathetic, like all things leftist.