To get people to hate the greatest country in history, and to embrace sociopathic Black Lives Matter ideology, it helps to start young. From Belleville, Illinois:

Every player on the Cahokia Quarterback Club football team (8 and under) took a knee during the national anthem ahead of Sunday’s game at Little Devil’s Field in Belleville.

Coach Orlando Gooden has been instructing the tots on Colin Kaepernick’s antics, and on the Jason Stockley decision, whereby after many years a white police officer was absolved of murder charges after shooting a drug dealer of politically preferred pigmentation, providing a pretext for days on end of riots.

Fittingly, Gooden played college football at the University of Missouri. Due to the absence of resistance, a Black Lives Matter uprising that started with the football team has reduced that school to a laughing stock in a financial tailspin.

When the anthem started, the Cahokia third graders immediately took a knee where they were standing. Their backs were away from the flag—but not on purpose—according to Gooden.

“What I teach my kids is love, integrity, honesty, fairness, respect and boundaries,” he said.

Sure, that’s what we all saw in nearby Saint Louis over the weekend.

Within 10 years, Gooden’s disciples will be sacking the public library and laying siege to the Mayor’s residence. 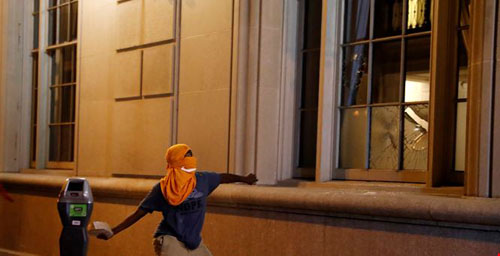