Are you tired of being denounced, denigrated, marginalized, belittled, demonized, physically assaulted, and systematically discriminated against because you are white? If so, you suffer from white fragility. Don’t worry, government has a cure:

A city-run cultural program in Seattle is offering residents classes on “white fragility” to [help] white folks understand why they can’t seem to handle matters involving race, and tickets have sold out.

Lecturer Robin DiAngelo, who coined the term, is teaching the taxpayer-funded class for the city Office of Arts and Culture. She defines white fragility as “a state in which even a minimum amount of racial stress becomes intolerable, triggering a range of defensive moves.”

Background on the government-sponsored lecturer:

DiAngelo, who is white, has made a career out of studying whiteness. She earned her doctorate in Multicultural Education from the University of Washington in 2004. Ten years later she became a tenured professor in whiteness studies at Westfield State University. Now she is back in Seattle working as a lecturer at the University of Washington. She’s also director of equity for Sound Generations, Seattle/King County and was recently appointed to co-design Seattle’s Race and Social Justice Anti-Racism Training program.

In “African American studies,” you learn all about how black supremacism is justified. But you won’t hear anything positive about whites in “whiteness studies” classes.

When they get around to the Final Solution, instead of “Arbeit Macht Frei,” the sign above the gate will read, “Renounce Your White Fragility.” 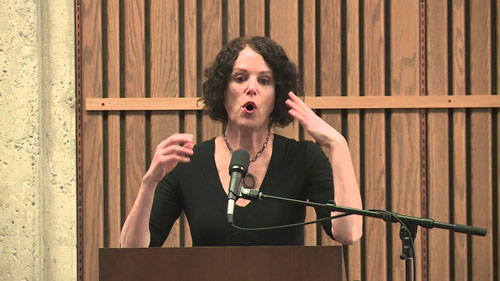 On a tip from Dennis in Redmond. Cross-posted at Moonbattery.