How do you know if a hate crime is a hoax? A sure indication is that it perfectly fits into the alternate reality liberals feel self-righteous about living in, but would be preposterous in the real reality. Take for example evil racists spray-painting “Vote Trump” on a black church and setting it on fire. In Liberal Land, the KKK would be responsible. On planet Earth, you know it was a hoaxer like Andrew McClinton:

Mississippi Department of Public Safety spokesman Warren Strain says Andrew McClinton of Leland, Mississippi, who is African-American, is charged with first-degree arson of a place of worship.

McClinton was arrested Wednesday. Hopewell Missionary Baptist Church in Greenville, Mississippi, was burned and vandalized Nov. 1, a week before the presidential election.

Greenville is 78% black. After the arson, the congregants were welcomed at a mostly white church, the First Baptist Church of Greenville. 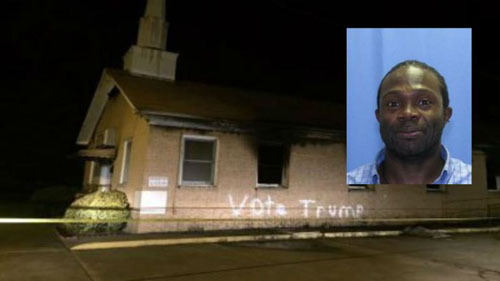 McClinton and his handiwork.