Let’s turn the tables, they said. Kill cops and whites[1], they said. They refers to the zombie activists from the uneducated #FYF911, #FukYoFlag, and #BlackLivesMatter movements. 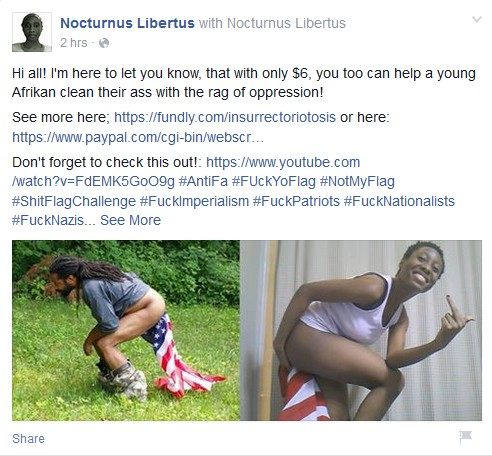 [2]An unidentified black man said “when those mother f**kers are by themselves, that’s when when we should start f***ing them up. Like they do us, when a bunch of them ni**ers takin’ one of us out, that’s how we should roll up.”  He said, “Cause we already roll up in gangs anyway. There should be six or seven black mother f**ckers, see that white person, and then lynch their ass. Let’s turn the tables.”

Do you hear this dreck? All she says is “YUP” “YUP” “THAT’S TRUE” while he rants about turning tables. Bro, tables were turned in 1863 when Abraham Lincoln signed the Emancipation Proclamation to free all slaves. He did that years after Africa sold their own people as slaves. Then educated people like MLK and Rosa Parks stood up by sitting down and helped mend racial relations as much as they could and segregation ended and things have gotten better, but you keep making it worse. If tables weren’t turned, then we wouldn’t be hearing your ignorant self on your lousy show; that would be for white people only. But it’s not like that anymore, is it?

Racism was supposed to go away, but activists won’t let it go away and a large portion of blacks continue blame racism for everything. It’s easier to blame racism rather than taking responsibility for their own actions, which generally include, but are not limited to: commiting crime, having six to eight children with five to eight fathers, dropping out of school, having kids but not being a father, knocked up in eight grade, playing the welfare system instead of getting a job, blaming white people for everything, asking for reparations when no one in their family was a slave, and always playing the victim card instead of making something of themselves. Asians got demolished in Hiroshima and they’re doing OK. Jews were slaughtered in Germany and they’re doing well. Your people were slaves a really long time ago, but you can’t figure it out? I’d rather be a slave then blown up by an atomic bomb. I’d rather be a slave then take a shower in a gas chamber. No one today was a slave, therefore black activists cannot use that in any argument.

Who really are the most racist people in America? The black activists are because they hate America and the people who live here. Black activists NOW are more racist than slave owners were then. They are worse than the KKK. Black activists monger hate, produce violence, and spam the world with their uneducated vile views and ask people to kill each other. What is wrong with these people? Stop committing crime, stop playing the victim card, get your together and do something with your life. What’s funny is that I haven’t heard about the KKK in about 20 years. Are they still around? If they are, you don’t hear about them rioting whenever a black person kills a white person. I guess under all those tattoos and heavy metal, the KKK is smart enough to know that burning down your own town like the small brained folks in Ferguson is destructive to your own community and doesn’t solve anything.

Some people think you have to be white to be racist, but that’s not true;  a racist can be any color. These lunatic black activists are the most racist people in America. In fact, they’re the most racist people I’ve ever seen in my life. It’s still 2015 right? I thought racism kinda died out until I saw these victim-card attention seekers acting like fools.

These activists try to make a point, but spewing propaganda that suggests murder completely mutes their point. One cannot make a point when the point lands their own people in prison. If you solidify your point without suggesting that people lynch and murder whites, then maybe someone will take you serious. If you really want to overcrowd the prisons with more black people, and increase those statistics, then go right ahead. I thought your goal should be to keep your people out of jail, not fill the place. Does anyone else see the stupidity here? I see a bunch of people acting ignorant and playing the race/victim card instead of investing time in education and employment.

If Martin Luther King Jr saw this, he would have pulled the trigger himself instead of being embarrassed by the fraudulent #BlackLivesMatter movement. He would’ve #BlackLivesMatter’s white Shaun King to have a seat in the back of the bus.

I’m friends with a lot of black people who are very educated and they firmly believe #BlackLivesMatter and #FukYoFlag is the most trifling thing black people have embarrassed themselves with in years.