Why is professor Saida Grundy[1] still employed at Boston University? This woman is a blatant racist and she really, really hates white men. She says they are THE problem for universities. By calling them a “problem population,” she is slyly condoning killing white males. She’s not only a racist, she is inciting violence and murder. I’ll say it again… why is she still teaching at that university?

This is the type of rhetoric we get with racist radicals from groups such as Black Lives Matter, the Nation of Islam and the New Black Panthers. It should not be allowed at any American college or university. It’s not free speech… it’s hate speech. Grundy is just one more example of the types of radicals that now teach our children on these campuses… at best they are progressive socialists, at worst they are militant racists and communists. 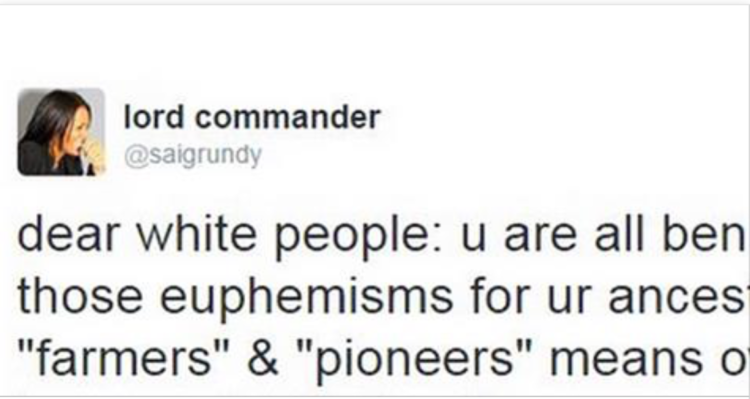 Saida Grundy, who was recently hired by the university to teach sociology and African-American studies, called white males a “problem population” on Twitter in addition to posting multiple anti-White tweets, according to Fox News[4].

She also said via Twitter, “Every MLK week I commit myself to not spending a dime in white-owned businesses. And every year I find it nearly impossible.”

Another one of her tweets put a target on Ben Affleck after he tried to hide the fact that he is a descendant of slave owners. Grundy wrote, “dear white people: u are all ben affleck. those euphemisms for ur ancestors like ‘farmers’ & ‘pioneers’ means owned humans & killed natives.”

If you can believe it, the university is standing behind Grundy, citing her “right to free speech.” Yes, she has a right to free speech, but the guidelines for any university should prohibit ‘hate speech’ and she should be fired. It is not safe for any white person to take a class from her… I don’t know why they would want to, but it is certainly a hostile environment as opposed to a learning one.

Minorities seem to get away with literally anything these days. And if someone gets hurt or killed, they blame it on whites and/or conservatives. As Young Conservatives points out, imagine if a white professor claimed Mike Brown should’ve been shot for charging Darren Wilson. Not only would it make headline news, it would cause the person to be fired. This is the ultimate double standard and this professor should be immediately fired.