There is nowhere that outright racism is really considered acceptable in today’s society — nowhere except academia, that is. On college campuses, it’s fine for professors to spew all kinds of race-based hatred, as long as it’s directed towards the “right” race. Consider this Trinity College professor, who responded to news of the Steve Scalise shooting by saying that first responders should have just let them die[1]… because some of the victims were white.

Johnny Eric Williams is an associate professor of sociology and was evidently incensed that Scalise, a congressional aide and two Capitol Police officers would not succumb to their wounds after being targeted by James T. Hodgkinson, a progressive Bernie Sanders supporter.

Sunday, Williams took to his Facebook page, writing that the victims of the shooting should have died. “It is past time for the racially oppressed to do what people who believe themselves to be ‘white’ will not do, put end to the vectors of their destructive mythology of whiteness and their white supremacy system. #LetThemFuckingDie,” he wrote.

Friday, he shared an article which echoed similar sentiments: 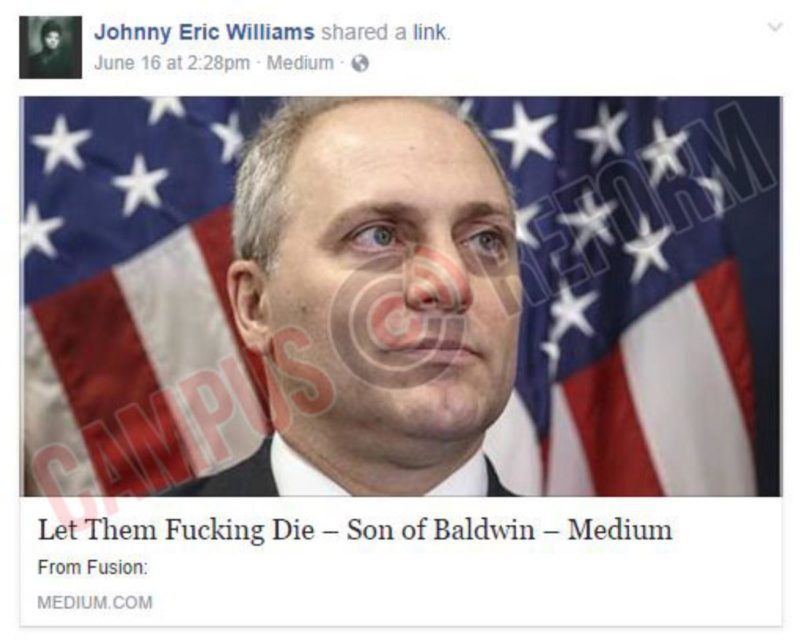 The author of the article was anonymous and wrote that the “bigots” in the congressional shooting should have been left for dead. “What does it mean, in general, when victims of bigotry save the lives of bigots?” the author asked, adding that black Americans could “imagine… that by becoming a shining example of this ‘righteous’ behavior, we might, somehow, guide these cannibals into becoming upright beings capable of following the very rules they enforce upon us.”

“If you see them drowning. If you see them in a burning building. If they are bleeding out in an emergency room. If the ground is crumbling beneath them. If they are in a park and they turn their weapons on each other: do nothing,” the author continued. “Least of all put your life on the line for theirs, and do not dare think doing so, putting your life on the line for theirs, gives you reason to feel celestial. Save the life of those that would kill you is the opposite of virtuous. Let. Them. Fucking. Die. And smile a bit when you do.”

Williams wasn’t finished sharing hate speech, however; other posts on his Facebook page continued advocating for violence against white Americans.

The question is, how does someone like Williams — who is expressing both racist views and calling for violence against innocent people — still have a job?