Fact checkers and leftists were caught sharing a racially charged advertisement that was thought to be about President Trump’s late father running for mayor, but then they realized the truth and instantly felt stupid!

The ad was said to be from 1969, but it was actually made last year.

The ad appears to focus on white people of New York and claims that Fred Trump is a “real New Yorker”[1] and the racial undertones suggest that only black people are drug dealers who moved in to ruin neighborhoods.

See the fake ad below.

Hillary Clinton confidante Sid Blumenthal[2] cited the ad in a recent op-ed, writing “In 1969, Fred Trump plotted to run for mayor of New York against John Lindsay, a silk-stocking liberal Republican. The reason was simple: in the wake of a New York State Investigations Commission inquiry that uncovered Fred’s over-billing scams, the Lindsay administration had deprived him of a development deal at Coney Island. He made two test television commercials. One of them, called ‘Dope Man’, featured a drug-addled black youth wandering the streets. ‘With four more years of John Lindsay,’ the narrator intoned, ‘he will be coming to your neighborhood soon.’ The ad flashed to the anxious faces of two well-dressed white women. ‘Vote for Fred Trump. He’s for us.’ The other commercial, ‘Real New Yorkers’, showed scenes of ‘real’ people from across the city, all of them white. Fred Trump, the narrator said, ‘is a real New Yorker too’. In the end he didn’t run, but his campaign themes were bequeathed to his son.”

One is left to wonder how Donald Trump’s father could ever put out such an ad – not because of the racial undertones – but because he never ran for office. 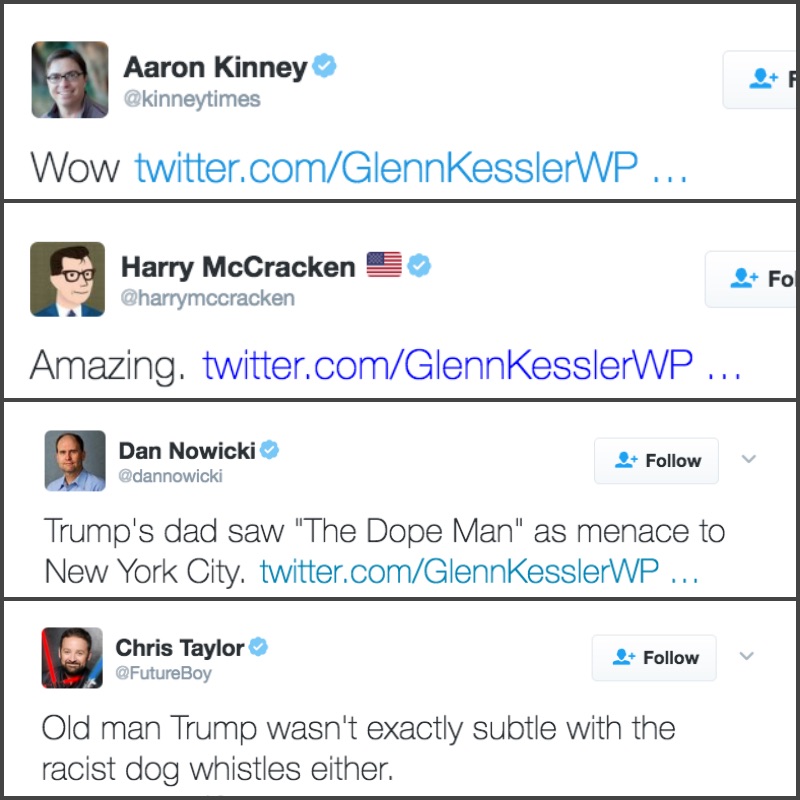 Now people are making fake mayoral campaigns about people’s late parents in efforts to smear President Trump in anyway they can.

When the fact checkers got caught sharing this, they instantly felt stupid.

Maybe the fact checkers are the ones sharing these things, letting them go viral, then calling them out later after they’ve already infiltrated the web and tricked millions of people into believing it.

Moral of the story is to be your own fact checker and don’t believe everything you see. People these days are in a rush to label anything real as fake news, push fake news like it’s real news and the entire galaxy of journalism is tossed upside down because people won’t simply be honest.

Careful, folks. There's no record of a Fred Trump mayoral exploration in the NY Daily News archive and the video's provenance is unproven. https://t.co/YCTunFxFWG[3]