And now for a heaping dose[1] of rational sanity from a young black woman who is fed-up with this racist crap. Let me just say, THANK YOU! I’m so fed-up with racism and identity politics. It’s beyond disgusting and dispiriting. We are hearing about racism and slavery this week simply because the Russian collusion meme is not biting… the media and the left use identity politics and virtue signaling every freaking time they get desperate.

This is indeed a manufactured race war. This young lady takes the left to the woodshed over the Charlottesville, Virginia rioting last weekend. Candice Owens is awesome here. She published a video below entitled, “Do I look like an idiot?” You’ve got to watch it. It’ll make your day. She points out that 93 percent of black homicides were committed by blacks… not raging KKK clansmen. She wonders out loud if black people are in fact being racist towards themselves. I like this woman. She gets it. 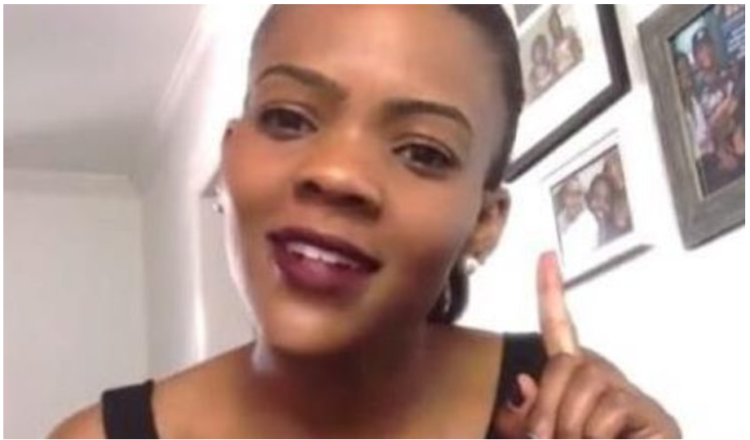 “Let me invite you over for a cup of hot steaming facts.”

A conservative black woman completely trounced the leftist narrative being pushed by the media on violent rioting last weekend in Charlottesville, Virginia.

“White supremacy and the KKK. Really? That’s what you guys want me to be concerned about this week?” Candice Owens asked in a scathing rebuttal of liberal media agenda in a video published Wednesday. “Do I look like an idiot?”

“If you are a black person and you expressed some irrational fears this week over the rise of the Klansmen and neo-Nazis, let me invite you over for a cup of hot, steaming facts,” Owens began as she tore into the racist narratives pushed by liberal media.

“Go figure! It’s like we’re all racist towards our own selves,” she concluded.

She was far from done… “I mean there are around 6,000 Klansmen left in our nation. You want me to seriously process that every day when I wake up?” Owens said as she shredded leftists and racists with abandon. She also said it’s “absolutely crazy” that people have not figured out that the media is behind the entire narrative and not President Trump. Bingo! The only thing she left out were communists, but I’ll let that slide.

“Why did we not hear a single thing about David Duke, white supremacy and the KKK the entire time Obama was in office?” Owens asked. “Do you think they were all hiding underground, waiting for the next white president? Meeting by the light o f the moon? Do you really actually mean they weren’t still meeting, holding protests and having rallies and marches?” On point… the media didn’t use that narrative because they didn’t need to throw the race card then. Now, they want Trump out and they are trying to bludgeon him with it. “Maybe the media wasn’t covering it,” she said. “Use your brain.”

There was not a ‘race problem’ before Obama. We lived and played together like good children for the most part. Now, communists, leftists and the media are trying to herd all of us into a race war. It’s insane. “You’ll have to forgive me for not realizing that the figurative racial sky was burning and it was up to me to choose a side,” she said. “Honestly, everybody involved in this fake racial war is a loser.” I may not agree with her on everything, but points for this stance. And she agrees that Trump had nothing to do with this. Spot on.