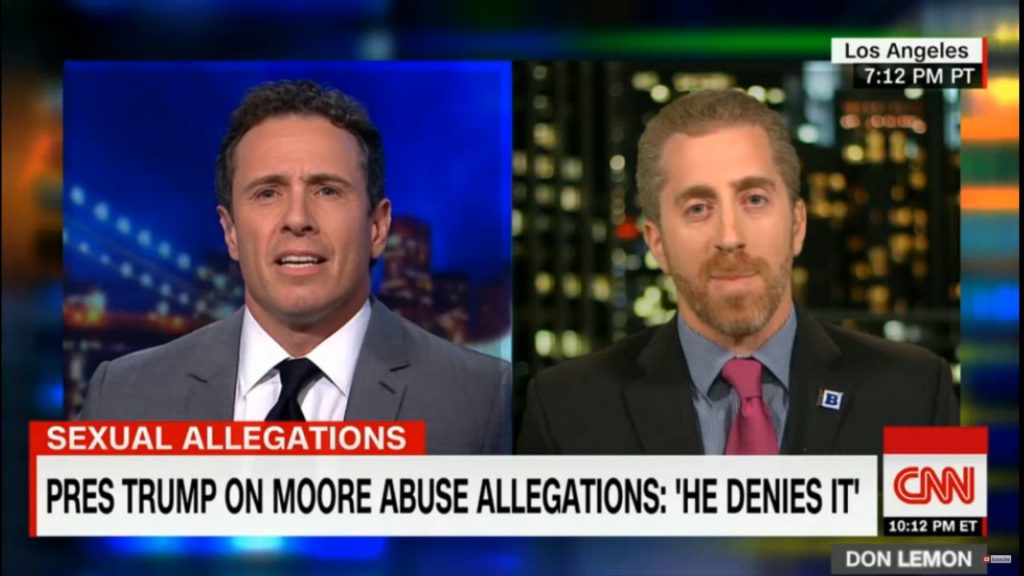 While I’m sure CNN viewers and Cuomo himself would’ve rather focused on the Roy Moore issue, Pollak instead brought up allegations of racist discrimination against CNN itself.

In the interview, Cuomo gave his belief that the allegations against Roy Moore deserved to be given the light of day and should be covered by the news media, which was a reasonable point for anyone to agree with, except this is when Pollak mentioned the allegations brought against CNN. Don’t those people deserve coverage too? The lawsuit in question that deals with racial discrimination at the network is set to be refiled this year.

Cuomo’s answer at first was “No!” before going on to say “no” again, saying that it’s “ongoing litigation” and that he refuses to talk about “ongoing litigation.” He went on to say that Pollak bringing up this other lawsuit with its own victims is a “distraction,” giving him an “A for effort.”

He jabbered on a bit about “these kinds of signals” and from there he wouldn’t give any more information or his opinion. I’m sure that his network has asked him to not comment on the issue, but that doesn’t mean he has to snap back like a wounded dog if he wants to be an honest, fair host who wants to provide coverage of Roy Moore’s accusers. Roy Moore was promoted by Breitbart’s Steve Bannon against Trump’s Luther Strange and in the last few weeks has been surrounded by allegations of sexual misconduct and stories of dating women considerably younger than himself. Despite the media circus, Moore is still six points ahead[2] of his potential Democratic opponent in the upcoming Senate race. The special election will take place on December 12th and while Moore has lost a slight edge, he is still holding on to his lead, according to pollsters.

Here’s the coverage from CNN where they discuss the lawsuit: