Kayle Mckelvey is the leader[1] of the black student union at Kean University and an agitator for the Black Lives Matter movement. She pleaded guilty to sending out numerous fake tweets last fall threatening black students. She then blamed it on racist whites. She did this to get more people to attend a racist rally she held. Since there wasn’t enough hatred between blacks and whites there, she decided to give it a push and make some materialize. She left the rally, went to the library and sent the racially threatening tweets and then returned to the rally. She made a big deal about how they were all being threatened by racists. According to Yahoo News, because of one of her tweets, which read “@kupolice I will kill all the blacks tonight, tomorrow and any other day if they go to Kean University,” multiple security forces were mobilized, including the Department of Homeland Security, in an effort to protect the student body. Except none of it was true. 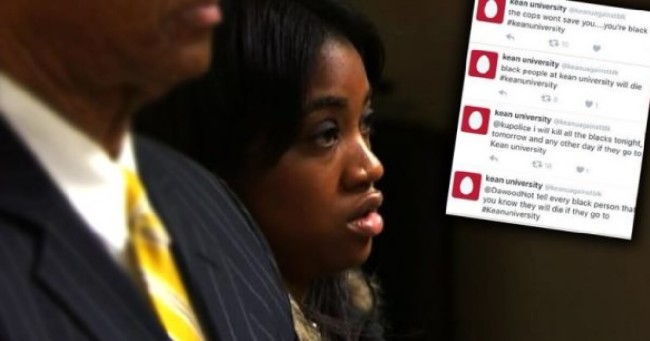 Kayle Mckelvey, 25, was a leader of a black student union at Kean University where she attempted to start racial divide and outcry for absolutely no reason. She’s now being brought to account for it, and she’s getting some pretty brutal justice.

Mckelvey pleaded guilty[3] to creating false public alarm via a series of anonymous, fake tweets last fall threatening her fellow black students. She needed more bodies to attend her racially based rally, and when realizing that there wasn’t any racial tension, she decided to create some.

She ran to the library, tweeted a series of threats[4], then ran back to the rally and told everyone that they were under threat.

A group of black ministers even demanded the resignation of Kean president Dawood Farahi over this because, as evidenced by the fake tweets, he had not done nearly enough to de-escalate racial tension. Now, a judge has sentenced Mckelvey to 90 days in jail and a fine of $82,000 for her hoax. She could have gotten someone killed doing this. Her fine will go towards reimbursing the school for the resources she forced it to waste in needless additional security. She deserves much worse than this. The minute she gets out, she’ll use it as an excuse to gin up more division and hatred. People who are part of the Black Lives Matter movement never learn and they are the ultimate racists.