There is a cancer in this country that is encouraging racism.  It is called liberalism.  When the president and people like Al Sharpton do nothing to call out black racism we are all in trouble.  While the country is focusing in on a false epidemic of white cops killing blacks, we have out spoken black racists openly calling for the execution of whites and all police.[1]

#BlackLivesMatter leader “King Noble” made national headlines about a week ago, after calling for “open season on crackers and cops” in a video rant uploaded to YouTube. [2]Gloating about the execution of the deputy in Houston, he made it clear that this was just the beginning of violence on whites by his group, promising to America that “it’s about to go down.” 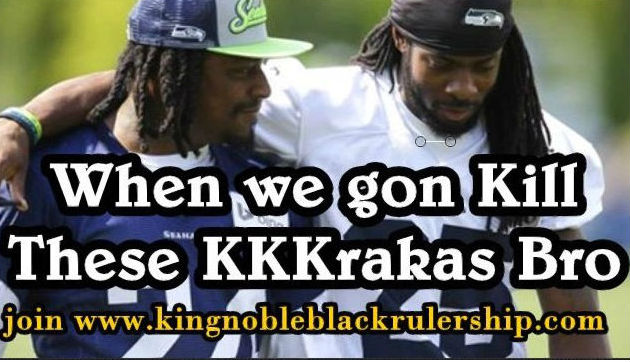 Somehow NFL sensation Richard Sherman found out his image was being used on the black supremacist’s website, was NOT pleased at all. Threatening to sue, the football star came onto Noble’s site to set things straight, commenting as user RSherman25 with the following rant:

“I did not believe this when I heard about it. I watched your videos. I started a life in the ghetto..I banged like a fool till I woke up. I was not suppressed by any man or woman, white or black,” he began.

“I worked myself up from Compton High School to a scholarship at Standford University and I did it myself. I take pride in what I have accomplished both as a black man, and an athlete. I could have stayed in LA and banged and used drugs and thought that it was all the white man’s fault. But that would be a lie. We are who we want to be, that is what is great about America. We are all born with the same chances in life..white or black…YOU choose to be a woman-abusing racist loudmouth. I would love to debate you on national TV. And if you condone senseless black shootings of whites and police officers, you better make that a debate on Springer, so I can bitchslap your ignorant ass!

You are what is keeping and making the black race look bad. Wake up fool. Do not glorify this half a man, he has worked for nothing. He chose to keep himself where he is, not the white people. It is time to take responsibility for your own actions, and not act like a stinking fool. Kids and young black men and women look at this site, and believe that they are abused. That is a bold-faced lie. It is out of the mouths of cheap thugs like you that are hurting our young and taking away the chances they have to make themselves a productive part of society. Brothers and sisters: the only slavery in America now is the one you put yourself into. Rise up like Doctor King as taught us, and be a real human being. We are all in this togehter, white and black. Peace to all, and I hope this stupid fake hate stops real soon. We are all brothers and sisters. Do not be fooled by the tyranny of evil men like this. Lift yourself up, educate yourselves, and work hard for a good life. No one owes you anything. Stand proud as a person of color, and do something meaningful with your life. I did and I am the best at what I do! Peace out, R Sherman.”

It is unbelievable to me that this guy, King Noble is still on the streets a free man.  What do we hear from the race baiters like Jackson and Sharton?  Crickets.  Not even the black president has come out to denounce or call for an investigation into this idiocy.