Naima Lowe is 2017’s Biggest Scumbag and that’s not an honor that she should take lightly. I have written over 2,000 articles in the course of my career here at Right Wing News and, to date, have never come across a story that almost literally made blood shoot out of my eyes.

The injustice of this story is absolutely mindboggling, because it is clear that this woman was looking for this kind of payout all along and would only get it from a liberal establishment, which is why I believe she went to work at Evergreen State University in Washington. 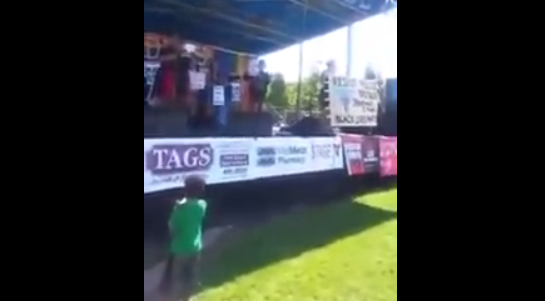 Lowe, who became famous after yelling that all white people are racist and harassed her white co-workers with her racist rhetoric, has won a $240,000 payout after she filed a “hostile work environment” and discrimination case against the college. She has since retired from her position, thank God.

But who exactly created this hostile work environment? Surely not her fellow liberal professors, who I’m sure fell all over themselves to make her feel included and accepted. In fact, I would go so far as to say that the only person with any hostility at that college would be her.

“You are now these motherf***ers that we’re pushing against,” Lowe said at the campus’s Equity Council earlier this year. “You can’t see your way out of your own *ss…This sh** is literally going to kill me.”

Watch the video below and decide for yourselves who you think was the one making the work environment “hostile.”

“White supremacy…lives and breathes within every single white person standing here right now,” she continued. “I refuse to shut my mouth and let white people set this agenda…the white gays, the white middle class assimilationist motherf***ing gays, took over the [gay] movement with their assimilationist goals.”

So wait, even white gays aren’t safe from her rhetoric? I’m beginning to think that she’s not interested in anything but black supremacy.

The fact that she was awarded any amount of money after a display like this is shocking to me. How could someone who so clearly has a problem with white people be able to say that she was the victim of a “hostile work environment?” If anything, I think she is the one who should be paying out a large amount of money to the people that she harassed and made to feel inferior due to their skin color.

If she had been white, do you think this would have played out a little differently? Let us know what you think in the comments below!