Liberals are some of the most humorless people you’ll find on the planet. Case in point? Social justice warriors are up in arms over a funny sign advertising an Italian restaurant. 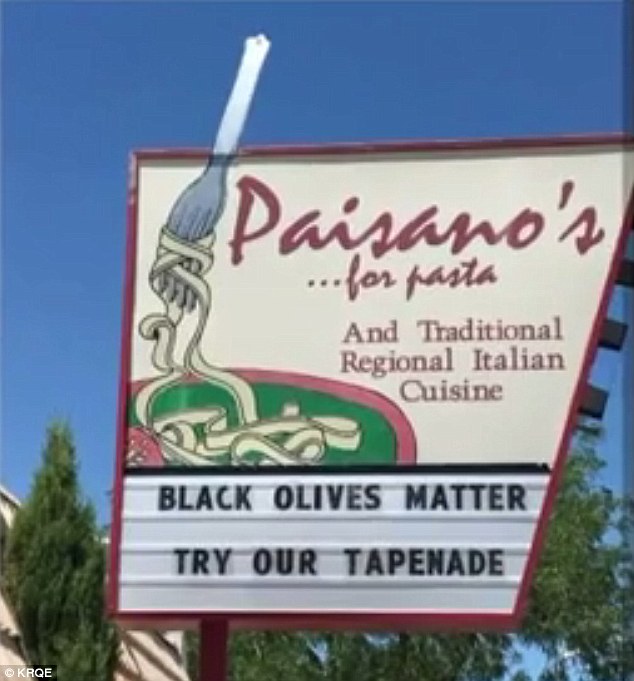 Our opinion on comedy around here is everything is open to mockery. Now whether or not the jokes are funny, that’s a different thing. But either everything can be mocked, or nothing can be mocked. Taking a slice of that advice, an Italian restaurant decided it would be funny to make “Black Olives Matter” sign to advertise itself.

A sign outside an Albuquerque restaurant is creating a firestorm on social media.

Viewers started sending in pictures of the sign outside Paisano’s restaurant which read “Black Olives Matter” followed by “Try Our Tapenade.”

The reference to the Black Lives Matter movement is generating some very strong reactions, with many calling it offensive.

Firstly I want to point out the ambiguity of the words “strong reactions” and “many calling it offensive.” What’s a strong reaction? The urge to eat pizza? The urge to protest? Needing to drop a deuce? Also, how many is “many” who find it offensive? Seven? Two? Of course none of that matters. Reactions and people taking offense is stupid. It’s a sign, people. Like the owner says, it’s a sign about vegetables. Remember that when you publicly show “outrage.” It’s a vegetable.

Some say it’s trivializing the Black Lives Matter movement and have taken to Facebook, writing things like, “This is [expletive] disgusting and insensitive.” Another comment read, “Trivializing deaths, abuse and racism, Classy.”

But some people say the sign’s critics need to lighten up.

“I’m not offended by it, but it is tasteless,” said one woman who KOB showed the sign to.

Because of the heated backlash, the restaurant has removed phrase from the sign and the owner says he didn’t mean to offend anyone.

Okay, again I ask what’s “heated” backlash mean? People using bad words on social media? Our nation is a bunch of pansies. I would weep for the future, but then you wouldn’t be able to distinguish me from the other ninnies ruling the narrative.

“We put up what we thought was a cute play on words, which we do commonly here at the restaurant,” said Rick Camuglia. “We were trying to promote our pan-seared ahi tuna with a black olive tapenade relish. And so we put ‘black olives matter, try our tapenade.’”

A joke. It’s a play on words. About a vegetable. The owner probably took the sign down to save his business from overly sensitive crapweasels who might torch his business over “black olives matter.” Welcome to 2016.

This is the world we live in, folks. Maybe this business owner should just consider himself lucky that the Black Lives Matter “activists” didn’t commit arson against him in retaliation.