This is just disgraceful in my book.[1] The City of New Orleans is taking down their last Confederate memorial today… the statue of Gen. Robert E. Lee. The Civil War is part of our American history. There were good people on both sides of the conflict and that war determined the direction of our nation. To remove military memorials is to try and rewrite that history and pretend it never happened. It is revisionist and political correctness run amok. Shame on New Orleans and definitely on the mayor there.

This was the last of four statues. The cowards took down three before dawn so no one would see. The Lee statue they are taking down in broad daylight to make a political statement. Mayor Mitch Landrieu will speak on this later today and grandstand, while making political hay by dishonoring Americans who fought for what they believed in. This is extremely un-American and proves nothing. 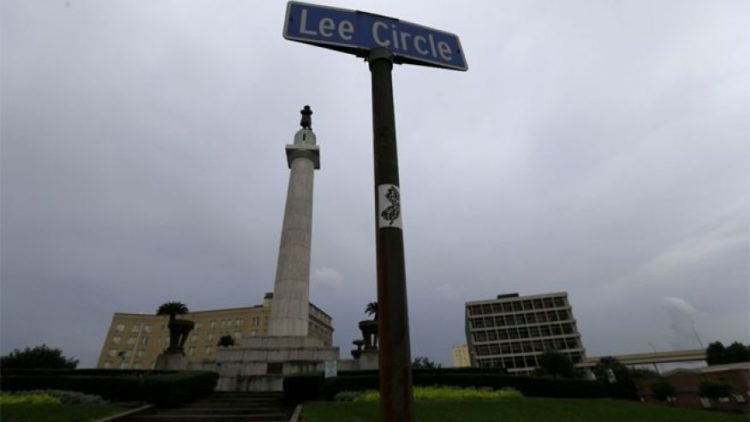 The city of New Orleans on Friday began taking down a statue of Gen. Robert E. Lee, the last of four Confederate-related statues[3] the southern city is removing.

The Lee statue is being removed during the day[4], unlike the other removals which took place before dawn. Mayor Mitch Landrieu plans to address the city about the removals in a speech later Friday.

The station reported that workers with power tools had surrounded the base of the 60-foot tall monument.

Cops cordoned off the area Thursday as protestors gathered.

In a news release obtained by The Associated Press, the city said the statues were “erected decades after the Civil War to celebrate the ‘Cult of the Lost Cause,’ a movement recognized across the South as celebrating and promoting white supremacy.”

The mayor’s office said no public money has been used in the removal. The city said it raised $600,000 from private donors.

There were quite a few protesters around the statue and I don’t blame them in the least. Those statues are part of New Orleans’ heritage. Removing them is part of the witch hunt going on all over the country to erase memories of the Civil War and of other items deemed as not ‘acceptable’. Censorship, revisionism and the sanitization of historical events is fascist.

This anti-white supremacy meme is put out by black racists such as Black Lives Matter, the New Black Panthers and the Nation of Islam. There are plenty of white useful idiots that promote it. This will not end well. We spent decades making the races equal and honoring our history and now it is all being swept away. The convenient excuse for all of this mania was Dylann Roof killing a number of black parishioners in South Carolina. Because he had a Confederate flag, progressives and racists started purifying the south of their history. And we just let it happen.

Landrieu drew blistering criticism from monument supporters and even some political allies. But he insisted throughout that the statues honoring the Confederate figures must go. He got private donors to pay for it and just did it regardless of what his constituents wanted. This is a dark day in America and is reminiscent of book burning. What next? Reeducation camps for whites? I wish I were kidding.

The third confederate statue is now down. Another step forward for our city. pic.twitter.com/MxIgs1NTrD[6]