Unfortunately, not many people are willing to take the high road. This election has been ugly. The division in our country is alarming. A house divided cannot stand…. right???

And this tweet aimed at Senator Tim Scott is the perfect example of this.

For those who aren’t familiar with Tim Scott, let me give you some context. Tim Scott is a senator from South Carolina. He is a strong Republican who has a pretty strong voting record. He also happens to be African-American. In that way, at least, he stands out. The Democratic party is traditionally the party of the black community. Michelle Obama even said this past fall that blacks owed their vote to the Democratic party and candidate, Hillary Clinton.

Senator Tim Scott takes a lot of heat for his political party from those who share his race. And recently, a tweet was sent out referring to him in an incredibly deplorable and offensive tweet calling him a “house N****.” Essentially saying he has sold himself back into slavery for the white people at the cost of his brothers and sisters. It is disturbing that anyone stepping outside of the norms is met with language like this.

But the Senator doesn’t seem to let it bother him. He shot back a one worded tweet that pretty much says it all…

He isn’t part of the house… it is the SENATE, folks. 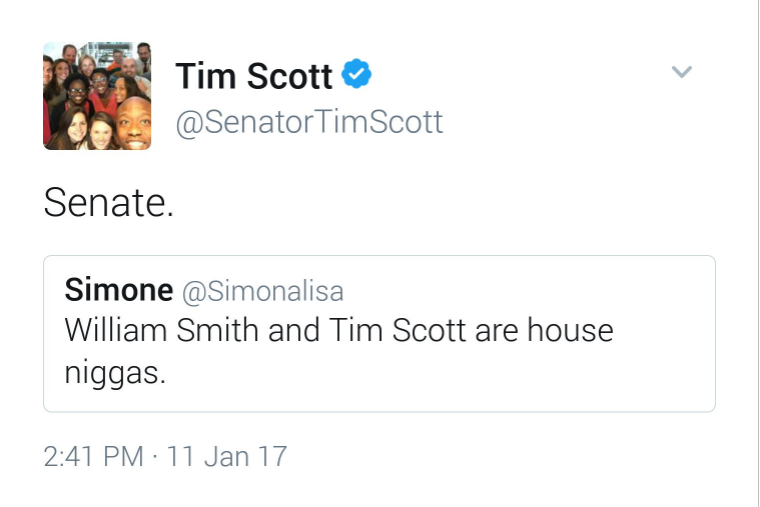 Take a look at what a few people had to say about his comeback.

The Twitter tournament of champions for 2017 has ended abruptly… @SenatorTimScott[3] has been declared the winner. Twitter may close now. pic.twitter.com/Od7U3ryz6X[6]