Libs are getting desperate in their search for racism against someone other than whites:

University of Maryland campus police launched an investigation into a discarded piece of plastic wrap Tuesday after receiving a report about a “possible hate-bias” incident.

“Out of an [over]abundance of concern, we are looking into this matter and conducting a review of our cameras in the area,” the department informed students via email, though The Diamondback reports that some students were upset when officers initially dismissed the object as garbage.

A UMD student tweeted a picture of the plastic wrap suggesting he was convinced that the detritus was intended to resemble a noose because it had been “under a tree at frat row,” alluding to an actual noose that was reportedly found in a fraternity house in April.

“Police say that since it wasn’t hanging…it’s just trash,” the student remarks, inserting a skeptical emoji before asking viewers to “Make your own conclusions.”

Many will conclude that moonbats are full of crap. Now even stray pieces of rubbish count as racist if they have knots in them, on the grounds that nooses have knots, and as we all know, only black people were ever hanged.

They ought to show enough initiative to tie a real noose and hang it from a tree. These days kids are getting too lazy even to stage a proper hate hoax. 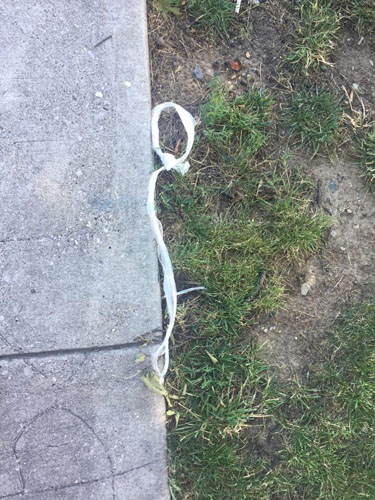 On the possibly overgenerous assumption that hysterical tweeter Jaime Hurtado could not have been admitted to college if he is stupid enough to genuinely believe this random piece of trash is a hate crime, he has been inducted onto the Hate Hoax List.