University Football Recruit’s T-Shirt: ‘I Hope I Don’t Get Killed For Being Black today’

Your initial reaction is going to be to roll your eyes and complain about his use of the race card, but stick around for a little while and read his own words.

You’re going to be proud that someone is talking about the issues that the black community has all but refused to talk about. Keep an open mind and I think you’ll be pleasantly surprised by what this young man has to say. 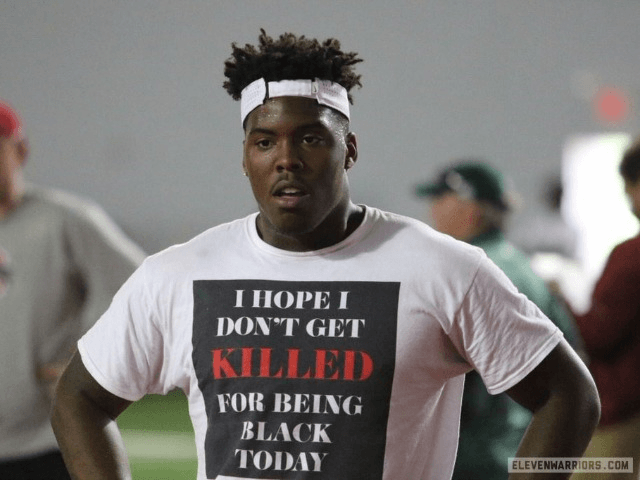 “I Hope I Don’t Get Killed For Being Black today.”

He explained the reasoning behind his decision to wear the shirt and make such a statement.

“I decided to wear the shirt because I wanted to bring attention to the epidemic of blacks being killed at an alarming rate. What we would like to do is have people talk about these issues to reduce the murder rate of African-Americans.”

“The shirt was created to bring light into the everyday problems that blacks face between police and black-on-black crimes. The shirt exemplifies a voice that we have, but may not be heard. So why not have people see it?”

While I may not agree with the lack of tact surrounding the message on the shirt, I am extremely happy that he has decided to discuss violence against blacks from all sides and not just white police officers.

“Being the individual I am and the spotlight I have, I felt that people would get the message if I wore the shirt. Because if I’m being real, people are looking at me even when I don’t know and I knew they would see the shirt.”

I love that he’s at least willing to start a conversation about violence within the African American community, something that even Black Lives Matter doesn’t seem to want to do. Good for this guy!