It is 2017 and I am writing stories about white supremacists and Nazis, so you can understand my frustration.

There is no place in civilized society for people who believe that race determines a person’s worth, intellectual capacity, work ethic or any other attribute. Yes, they’re allowed to have their disgusting opinions, but they are roundly rejected by any and every decent human being on the planet.

I’d call them animals, but quite frankly that’s insulting to animals. 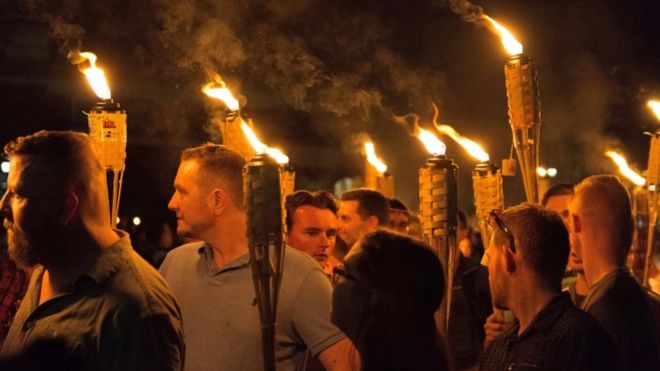 The most recent neo-Nazi rally in Charlottesville, Virginia was once again punctuated by tiki torches and faux concern for Confederate statues, when all they care about is being able to remember slavery as “the good old days.”

Shockingly (or not), this little get together was organized by Richard Spencer, who has a history of alt-right and white supremacist commentary.

Those in attendance were heard shouting, “We will be back” and something that sounds a lot like “Jews will not replace us.”

If you’ll remember, the last time these upstanding fellows decided to hold a slumber party, 32 year-old Heather Heyer ended up dead after being crushed between two cars as a result of a high-speed collision. That would be a good enough reason for me to never be seen with any of those people again, but apparently they were upset that their bro-night got cut short last time and decided to go for round two.

HAPPENING NOW: @RichardBSpencer[2] & white nationalist supporters are back with their torches in front of Lee statue in #Charlottesville[3]. pic.twitter.com/CwVhxpN7r8[4]

They were told that they were absolutely not welcome in Charlottesville by the mayor.

There were somewhere around 40-50 people in attendance for the rally and all were yelling stupid slogans like “The south will rise again” and “Russia is our friend.” It’s almost as if they’re trying to troll the left, but their ideology is so God-awful that they just ended up looking worse than the people they hate.

They also claimed to represent “white America’s interests” and as a “white person” myself, I would like to say thanks but no thanks. I have no problem speaking for myself and the last thing I need is some race-obsessed rich kid telling me what he thinks I need.

Thankfully these morons are hard to find because there are so few of them and rallies like this are as rare as hen’s teeth, but the fact that they happen at all proves that for as much as we wish racism would die in America, it never will.