Racism is everywhere you go today…[1] at least on the left and in the media. Except of course when it is against a white guy. A young waiter got to experience it firsthand at a Mexican restaurant in Memphis, Tennessee recently. At “On the Border Mexican Grill & Cantina,” Nathan Bergeron waited on a family on his evening shift. It was his last table for the night and he gave them excellent service as is his habit. When they paid for their meal, he took their check. The husband, wife and teenager spent nearly $50 on their meal and left no tip whatsoever. Even more of an insult was at the top of the check they were given was a racist message: “We don’t tip white ppl, LOL.” Racist asshats.

There are always jerks who don’t tip, but it takes a special kind of scumbag to do something like this. Wonder if they are illegal aliens or just racists? The waiter was shocked at the message and I don’t blame him. When I tip on a meal, it’s usually 25 to 50 percent of the ticket. And I would never in a million years leave a message like this for anyone. I never even notice the race of who waits on me… just how hard they work. Behavior like this is inexcusable and evil. 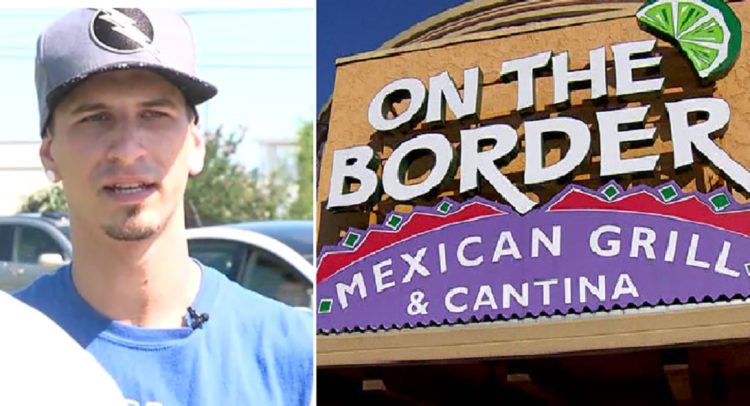 A young waiter at a Mexican cantina in Memphis, Tennessee, recently received a racist remark on a check in lieu of a tip.

Nathan Bergeron, a white waiter at “On the Border Mexican Grill & Cantina” in Memphis, told WATN-TV last week[3] that while waiting his last table of the night recently he received a $0 tip on a meal that was nearly $50. The patrons included a husband, wife and a teenager.

Receiving no tip on a large meal is not surprising, Bergeron told WATN. But what he did find surprising is the reason the customers left no tip. At the top of the check, the customers wrote, “We don’t tip white ppl, LOL.”

Nathan had this to say, “I was more shocked,” he said. “The fact that they would be so blatant and put it out there. I treated that table no differently from anyone else,” he explained. I’m sure he did and it didn’t matter. They thought it was funny… I find it despicable. Nathan showed his friends the receipt thinking maybe he was taking it too seriously. One of his friends, Brandy Sciara, got really ticked over the note, so she posted it to Facebook to “raise awareness” about Bergeron’s situation, according to WATN. “He’s a good person. He goes to work, does his job,” Sciara told WATN. “When I saw the comment I cried. I was always told, ‘If you have nothing nice to say, don’t say it at all.’”

Brandy set up a GoFundMe page for Nathan over all of this. In just three days, her goal has been massively exceeded. She was shooting for $500 and has raised nearly $7,000 for Bergeron. I just went there and gave, we all should. This kid is living out of his car, now he’ll be able to rent somewhere decent to live.

Racism is not okay, EVER. Nathan isn’t letting this get to him. “I’m not going to let this bring me down,” he said. “I love what I do. I get to meet new people every day and interact with people from all different backgrounds.” Now, that’s a great guy.