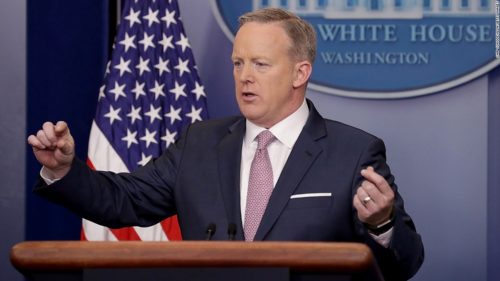 Sean Spicer was in the ABC News hot seat[2] as Martha Raddatz tried to hold his feet to the fire with regard to President Trump’s Executive Order halting some kinds of immigration from seven problematic majority Muslim nations. The sound of Liberal’s brains imploding is ringing throughout our land as they realize, with abject horror, that Trump intends to keep his campaign promise of making America safe again.

Spicer maintained his cool throughout and patiently answered Martha’s incredulous questions with truth and common sense. It’s too bad she didn’t listen. The video shows it all. But some of the high points are as follows; it was actually President Obama who put these nations on a list requiring greater scrutiny. Spicer said, “These seven countries were identified by the Obama Administration as needing further travel scrutiny.” Of course Raddatz promptly ignored that fact and continued pressing Spicer about how mean she apparently thinks it is to look carefully into the backgrounds of folks trying to come here from countries with terrorism problems.

Listening to the Liberal media, it would seem like Trump locked the border for good. But then again Liberals aren’t very good at logic. A simple reading of the order shows temporary precautions until we can get control of the vetting process, but no restrictions on immigrating or visiting the USA the old fashioned way…getting a temporary visa and/or and going in for an interview from the US consulate.

The Left will see anti-Muslim sentiment no matter what. No need to cater to their flawed perceptions. Let’s just make America safe.