Watch as a man who attempted to have sex with a child, tried to play the idiot and fake not knowing English as a group of pedophile hunters were able to track him and handle some business!

The man caught on camera in his sick act is Bahram Hosseini, 49. He believed that all along he had been chatting up a 14 year-old boy on social media app Kik – but it was all a set up by the Guardians of the North. 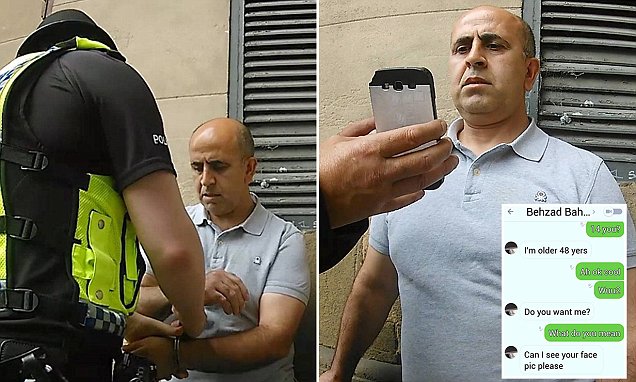 Believe it or not, Hosseini is also an asylum seeker. Go figure. He had set up a meeting with the non-existent chat victim at a train station. But when he got to the station, he was met by a very different bunch.

Hosseini had moved to the city from his home in Pontefract, West Yorkshire. For those of you who don’t know, that trip was around a 100 miles. The man was that desperate to rape a child.

The minds of these people are amazingly sick.

The man was caught in the act and here is the video that exposed this pedophile to the world:

Catherine Silverton is the lawyer that was prosecuting and claimed that Hosseini had sent the messages to ‘Joey’, shedding a bit of truth by claiming he was 48 years-old and was really in the market for a boyfriend…Ugh.

Of course ‘Joey’ isn’t real, but that didn’t stop Hosseini from sending off sexual messages. The sick bastard knew his potential victim was 14 and there is no excuse for him.

A spokesperson for Guardians of the North shared some information to use: “What shocked us most about this case was the element of planning that went into it. Hosseini even took photographs of his tickets while he was on the train and sent them to us. When we confronted him he pretended he couldn’t speak English which was insulting and made me angry. He had been communicating with us on social media in perfect English. I am glad we caught him before he went on to abuse a real child.”

This guy is only doing 13 months in jail now…that just doesn’t seem nearly long enough for a pedophile. You can bet that this creep will go back to doing the same thing he got arrested for. Pedophiles don’t change. Period. It would be best to keep your eyes on him, because he will be out doing the same thing again, I promise that.