In response to the announcement of travel restrictions on seven countries likely to export Islamic terrorists, Starbucks expressed its preference for Angela Merkel’s “let them all in” approach by announcing that it would hire 10,000 refugees at the expense of unemployed Americans. This turned out not to be such a wise business move:

The coffee giant’s consumer perception levels have fallen by two-thirds since late January, according to YouGov BrandIndex.

The perception tracker measures if respondents have “heard anything about the brand in the last two weeks, through advertising, news or word of mouth, was it positive or negative.”

High-handed moonbattery apparently makes the progressives running most large corporations feel self-righteous about how politically correct they are. But they still have to sell their products to the regular Americans they so conspicuously despise. Here is the effect the 10,000 refugees promise has had on the YouGov BrandIndex Buzz score for Starbucks: 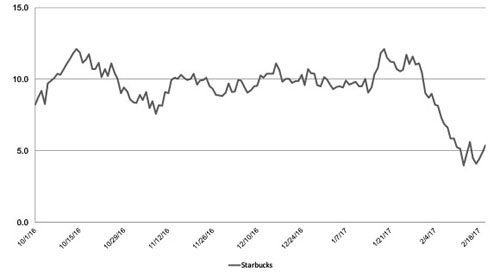 You can’t boycott every company run by sneering moonbats, if only because it is impossible to keep track of them all. But why give business to people who go out of their way to poke a stick in your eye? They serve coffee at Dunkin’ Donuts too, and without the pretentious ambiance.

On tips from Torcer, Bodhisattva, and J. Cross-posted at Moonbattery.