By now we should be used to it. But it is just too surreal to get your head around. Here is how the Washington Post covers the horrifying story of a Somali refugee police officer gunning down a woman as she spoke with another officer in Minneapolis:

When Mohamed Noor joined the Minneapolis police force and was assigned to patrol the city’s southwest corner, the Somali community there — the nation’s largest — threw a party for him to celebrate.

He was the first Somali American officer to serve in Minneapolis’s fifth precinct and one of fewer than a dozen Somali American officers in the department. His presence on the squad brought Somali activists some pride and reassurance at a time of Islamophobia in America and nationwide racial tension stoked in part by shootings of black people by white police officers.

Now that same Somali community is bracing for a backlash against Noor that has already begun.

Here’s what they mean by backlash:

Already, hateful posts criticizing Islam and sharia law are filling social media in response to the police shooting. Several far-right blogs featured sensational headlines that blamed the officer’s ethnicity for the deadly use of force.

Other Somali officers in the police department are “nervous,” [Omar] Jamal said.

More on WaPo source Omar Jamal, who has been called the “Somali Jesse Jackson” and who has been convicted on immigration fraud charges, can be found here.

The piece ends on a note of effusive praise for Noor. If a black Muslim shoots an innocent unarmed white woman, the Washington Post knows which side to take.

Why Noor shot Justine Damond may never be known, but it certainly appears to have been murder. Some of her blood has splattered onto liberals, because Noor is a product of Affirmative Action.

The federal government and do-gooder church volags it finances with our money have established a Somali colony in Minneapolis, and local officials twist themselves into knots to provide the colonists with hiring preferences. Finding refugees from the savage land of Somalia who are even remotely qualified to serve as police officers has proven difficult. This may be why Noor was still in a squad car despite three complaints against him in only 1 year since completing his training, including a lawsuit alleging that he brutalized another woman in May. It is also why we will never be told his motive if it has to do with rage inspired by Damond’s sharia-noncompliant clothing (she was wearing pajamas when he killed her). 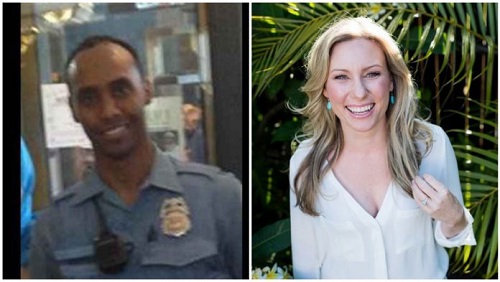 Noor and his victim.