Bless the French[1], because after all, they are… French. People off the street there overwhelmingly say they want more refugees in their country. When asked if they would take them in, they say, “Of course!” So a television show decided to test that resolve and when liberals said they would take one in, they kindly produced one and said he needed a place to stay. Then the excuses started and voila! There was no room at the inn. Funny how that works, isn’t it?

It’s interesting how liberals are always for illegal immigrants and refugees, until it comes to actually welcoming them into their home. They are all talk. They say all the right things for the left, but their actions are found lacking in the extreme. It’s just how liberals are. They want the refugees, but they want someone else to take care of them. They can come into their country, but stay out of their yards and homes. Hypocrites. 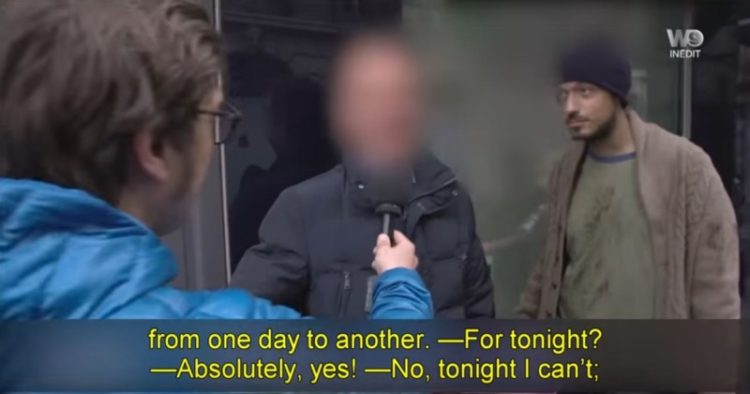 It’s funny; the left is always pushing for countries to take in more refugees and migrants, especially from Middle Eastern countries in turmoil, but what happens when they are asked to take a migrant into their own home?

Many usually say “of course I would house and help a migrant,” but in reality, would they?

A television show in France decided to put this to the test. They not only took to the streets to ask people if they wanted more immigration, but they asked people if they would take a migrant into their own homes.

All of the people they asked were absolutely for more immigration and would absolutely take a migrant into their homes. There was no question about it.

Until they actually produced a migrant and said he needed to stay somewhere.

Every single one of the people who said they’d take a migrant into their homes, refused. They each used different excuses, but they all refused when actually faced with the real choice of taking in a migrant.

This kind of crap is why Marine Le Pen has a chance of winning in the election there this weekend. People are sick of the globalist, open borders, refugee loving elitists. Even the French have reached their limit on this nonsense. The leftists in the video immediately trotted out a bunch of excuses as to why they couldn’t house the migrant, with one claiming he was sleeping in a hotel that night. When asked if he would welcome Slobodan for lunch or for a shower, another man agreed only to give him 20 euros in cash. Point made.

I might just point out that in some European countries, you no longer get a choice on whether you want to take in refugees or not. It’s forced upon you. In fact, some are forcing people to literally give up their homes to these people. This just shows how liberals will virtue signal repeatedly about how “progressive” they are until it comes to dealing with the actual practical reality of what they’re advocating. It’s one thing to say you support something. It’s quite another to do it. And by the way, Americans in New York have been asked these same questions and have reacted exactly the same way. It’s not just a ‘French’ thing anymore.