Let’s say a Muslim came up to you and said, “Pamela I’m against terrorism. I don’t want Sharia in this country. I don’t want to see Israel destroyed. I consider myself to be a moderate. But, I keep hearing people in the news claim you hate people like me. So I want to hear it straight from you. Is that true?” What would you tell that person?

Pamela Geller: “I love people like you and I hope that you and I will fight together this oppression, this gender apartheid,” and if this moderate knows anything about me, he or she knows that I fight for the moderates. I fight for people that are leaving Islam. I’ve created a gateway, a network of information, safe houses, and other people, other resources for Muslims in trouble to go to because it is so hush-hush. I do not hate people. It’s why I do what I do.

A lot of people talk about free speech, supporting Israel, and refusing to kowtow to radical Islamists. It’s good that they do because those are all important things. However, I want to take a moment to say a kind word about one of the few people who is DOING SOMETHING about those issues.

My friend, Pamela Geller[2] is running these ads in subways[3]. 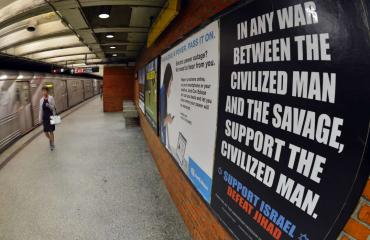 Israel is a tiny, civilized, vibrant Western Republic that’s friendly to the United States and the home of millions of Jews (along with their ancestors) who’ve been driven out of Europe, Russia, and the Middle East by people who want to kill them. They have proven time and time again that they are willing and able to live at peace with their neighbors, but unfortunately, their very existence is considered provocative to the nations around them. In other words, if you’re wondering why they’re hated and you cut through all of the rhetoric, it’s really because they’re Jews who continue to breathe in proximity to people who consider that unacceptable.

As to the Palestinians, they are willing to blow up their own children in order to murder Israeli civilians as part of a campaign that they hope will lead to genocide. If you don’t believe that, just listen to Hamas because Hamas openly admits it. Calling people like this savages isn’t an insult to them; it’s an insult to savages. The fact that it upsets far left-wingers, the politically correct, anti-Semites, and people who are afraid radical Islamists will show up and cut their heads off doesn’t make it less true.

That last grouping is particularly important now that we have people in other nations threatening violence if we don’t eviscerate our free speech in order to make it acceptable to radical Islamists who believe in Sharia law, stoning gays, and refusing to allow women to leave the house unless they’re covered head to toe.

It’s one thing to tell people like that to take a long walk off a short pier, but it takes more guts to go to court in order to defend the 1st Amendment. It’s easy to say a few nice words about God’s chosen people, but it takes courage to put up ads defending them when you’re going to be vilified for it by apologists for suicide bombers. It’s easy to condemn radical Islam; in fact many of Pamela Geller’s most strident critics do the same thing and then turn around and attack her. You see, the difference between Pamela Geller and many of them is, she isn’t just saying it because she thinks she feels like it’s a political necessity; she means it.

Last but not least, I’ve known Pamela for years, long before most of her fans and detractors today had ever heard of her. I’ve talked to her by chat, on the phone, by email, and in person and I have never once heard her condemn Islam. I have never once heard her express hatred for all Muslims. If she did or I thought she felt that way, then I wouldn’t support her. Moreover, what Pamela is doing is important work. If even Christians and Jews are too intimidated to speak up strongly for Israel or against radical Islam, how in the world can we expect moderate Muslims to do it? If Pamela is willing to be at the tip of the spear, if she’s willing to be vilified, smeared, attacked, and threatened for saying things that radical Islamists and their apologists don’t want to hear, then I think she deserves support. I hope more bloggers will speak up on her behalf, donate to her cause, and patronize her website[5].