I have to admit that when I first watched this video, I suspected it was a hoax because it was just too incredible[1]. 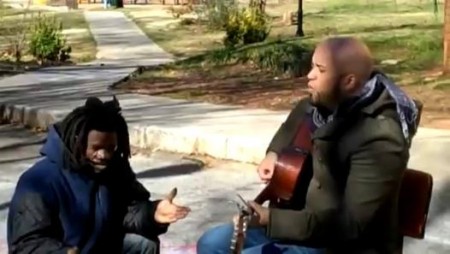 Christian singer, Carlos Whittaker, was shooting a music video for his tune “God Of Second Chances” when something unexpected and totally amazing happened. While the cameras were rolling, a homeless man approached the spot where the singer was performing, clearly enticed by the religious music. The homeless man then knelt down at Whittaker’s feet and began to cry because he was so moved. Whittaker continued to play his guitar and sing to the man.

…Then, things got even more magical, when the homeless man started to sing along to the song and add his own reggae improv parts. Much to the amazement of everyone there, he sounded incredible! This guy could be a professional!

The homeless man’s singing is so genuinely beautiful and adds to the song so much, that it SEEMS FAKE. So, I had to do some research.

After checking it out, actually this does seem to be a real video, although it was shot a few years ago. There’s a bit of a sad backstory though. This comes from a post on Carlos Whittaker’s website in November of last year[3].

So it’s really amazing how this moment that happened almost 4 years ago now, is catching steam again.

Just so everyone knows what went down after we met Danny.

We had about a 30 minute convo, that was mostly for my and his ears only after our moment. There were many other moments in there that changed my life and perspective on homelessness.

I asked Danny how we could get back in touch with him and he gave me a cell phone number and told me he is at that park often.

Well the cell phone number didn’t work and when I went back to that park the next day, none of the homeless men in the park had ever seen Danny. Or so they told me.

I had dreams of taking Danny on the road, recording another version with him, and getting him off the street.

And to this day, almost 4 years later, I’ve not heard from Danny.

Although every single time I’m in Atlanta I drive to the park and sit on a bench, hoping that angel walks back by.

Sometimes the Lord gives us moments, for the moment alone, and not for what we think we should do with the moment.