This invention would only be ‘offensive’ if you were a ‘terrorist’[1] and attacked someone, therefore getting your self sprayed with pig’s blood. Don’t attack or bomb people and they have nothing to whine about. Notice how they bring up Jews and how this is offensive to them. I don’t think you will hear Jews complaining about this invention. Just like you won’t see them committing barbaric acts of terror. I find suicide bombers deeply offensive and no one seems to be stopping them. Let the pig’s blood fly! 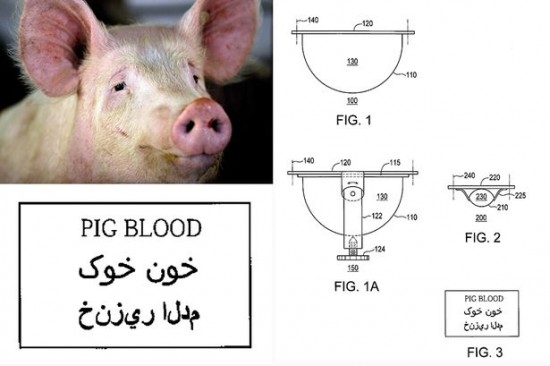 You know what else is deeply offensive? People being torn to shreds by a suicide bomber.

An American inventor has unveiled an offensive “anti-terror” system designed to spray Muslims with pig blood.

The highly controversial device is the work of tinpot tinkerer Franklin R Lacy, who works in Tampa, Florida.

He has applied for a patent on a “system for protecting against terrorist and illegal invasion” which cruelly exploits the Islamic ban on eating or even handling pork. […]

“It will keep suicide bombers from blowing themselves up near the container of pig blood because they believe that they would be guaranteed not to go to heaven,” Lacy wrote.

Fiyaz Mughal, director of the interfaith group Faith Matters, said the device has “been created by someone who seeks to humiliate specific faiths”.

“The patent is particularly troubling if used against Jews or Muslims, because it would be deeply offensive and insulting to their faith and beliefs,” Mughal continued.

According to these people, how dare you do anything to protect yourself from Islamic radicals. Don’t you know you are supposed to die like a good little infidel? The argument above is so specious it defies brain cells. Did they ever consider that mass beheadings, hangings, burying people alive, burning people alive, stonings, throwing people off buildings and just plain old shooting or murdering people gets old? If you don’t want people to hate your religion and do things you find offensive, stop acting like barbaric hordes of roving monsters. I consider this a viable deterrent, just as bullets dipped in pig’s blood is. I don’t wonder about the mindset of the inventors of these safeguards… but I definitely wonder about the mindset of terrorists.