Not content with having the freedom to be non-believers, an atheist group has plans to erect 55 billboards this week in the Sacramento, Calif., area to force their point of view on others.

The effort is part of an ongoing national campaign by the: Freedom From Religion Foundation: called “Out of Closet,” which lets atheists know they are not alone during the: Christmas season. 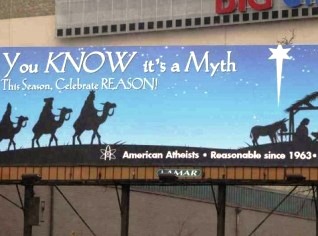 “There are a lot of non-believers and this time of year, they feel like they’re all alone,” Judy Saint, president of the Sacramento chapter, told the local ABC affiliate. “This is not directed to people who enjoy their church, who enjoy their religion. That’s fine. But we’re talking to people who don’t know that atheism is okay.”

The messages on the billboards vary, but many have a decidedly anti-God tone. Examples include:

“Without god, I am full of love”

“I believe in people, not gods”

Nonetheless, Saint said the movement is not about being anti-God, but being OK with not embracing a God, according to NEWS10. “You don’t have to have a God in your life,” she said.

Rev. Michael Kiernan, pastor of the Our Lady of the Assumption Catholic Church, told KCRA that the money for the signs would be better spent on charity.

“We are confident God is going to be OK,” he said. “God has been around forever and these things come and go. This too shall pass.”

This post was used with the permission of BizPac Review[3]